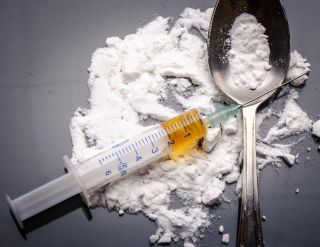 Heroin is commonly used in powder form. Users heat the heroin on a spoon and inject the resulting liquid.
(Image: © Evdokimov Maxim | Shutterstock)

People who are addicted to opioids are 40 times more likely than others to abuse heroin, making the abuse of prescription opioid painkillers the strongest risk factor for heroin use, according to a new report.

The findings highlight the strong relationship between heroin and opioid painkillers. Health officials say opioid abuse is one of the main drivers of the rapid increase in heroin use in recent years. Use of the drug in the United States increased more than 60 percent between 2002 and 2013.

"Heroin use is increasing at an alarming rate in many parts of society, driven by both the prescription opioid epidemic and cheaper, more available heroin," said Dr. Tom Frieden, director of the Centers for Disease Control and Prevention. [The Drug Talk: 7 New Tips for Today's Parents]

People who are addicted to opioids are primed for heroin addiction because opioids are essentially "the same chemical, with the same impact on the brain, as heroin," Frieden said at a news conference today. Improving the way doctors prescribe opioid painkillers is one way to prevent people from starting to use heroin, the CDC said.

In the new report, researchers analyzed information on heroin use trends in the United States between 2002 and 2013. In addition to the increase in heroin use, deaths due to overdoses on the drug nearly quadrupled during this time period, the researchers found.

The biggest increases in heroin use were among population groups that have historically used this drug at low rates. For example, during the study period, heroin use doubled among women, and more than doubled among whites.

The study also found that more than 90 percent of heroin users also take another drug, including cocaine, alcohol or marijuana. Rates of opioid painkiller use among heroin users increased 138 percent during the study period.

"The problem of heroin abuse or dependence is not occurring in isolation," the researchers wrote in their report. People who use multiple drugs are at increased risk factor of dying from an overdose, the authors noted. In 2013, about 60 percent of the 8,200 heroin-related overdose deaths involved more than one drug.

Other ways to help reverse the heroin epidemic include expanding access to treatment for people who are addicted to the drug; increasing use of naloxone, which can treat overdoses; and reducing the availability of heroin, Frieden said.

The report is published this week in the CDC journal Morbidity and Mortality Weekly Report.