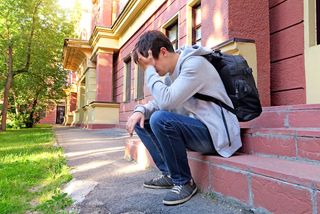 Kids who have a parent who has been diagnosed with certain psychiatric disorders may be at increased risk for attempting suicide or committing a violent offense, a new study of people in Denmark suggests. These kids are at even greater risk of these behaviors when both parents have the disorders, the study found.

The parents in the study had a wide spectrum of psychiatric problems, ranging from anxiety, bipolar disorder and depression to schizophrenia, substance abuse and suicide attempts.

Of all the psychiatric conditions among the parents in the study, the strongest associations were seen in mothers and fathers who had a history of abusing marijuana, antisocial personality disorder or a prior attempted suicide. Children whose parents fell into any of these three groups were at the greatest risk for suicidal behavior and violence as they got older, according to the findings, published today (Aug. 31) in the journal JAMA Psychiatry. [5 Controversial Mental Health Treatments]

During the study, 2.6 percent of the kids attempted suicide, and 3.2 percent were convicted of a first violent offense, the researchers found. This meant that the vast majority of kids whose parents had one of the psychiatric conditions evaluated in the research did not attempt suicide or commit violent offenses.

But the results also showed that when there is a history of mental illness in both parents, children have double the risk for attempting suicide and committing violent offenses, compared with kids who have only one parent affected by mental illness, said Pearl Mok, the study's lead author and a research associate in the division of psychology and mental health at The University of Manchester in England. This group could potentially benefit from early psychological interventions, the researchers said.

In the study, the researchers tracked data from about 1.75 million people born in Denmark to Danish parents between 1967 and 1997. The researchers followed the children of parents with mental disorders from when they turned 15 through the year 2012.

The researchers dug into Denmark's national health databases to gather information about parents' mental disorders and about suicide attempts in both parents and children, as well as data on violent crimes, such as robbery, homicide and assaults.

Although the data showed that suicidal and violent tendencies appear to run in families, the reasons why this occurs are unclear, the researchers said.

The most likely explanation for the link is that people's risk of mental health disorders results from a combination of both nature and nurture, Mok said. [11 Warning Signs Help Spot Mental Illness in Children]

In other words, certain factors may run in families, such as a shared genetic vulnerability to psychiatric disorders and impulsive-aggressive traits. And these may contribute to the links seen between parental psychiatric disorders and the risk for suicidal and violent behaviors in their children, she said. But in addition to heredity, an environmental component is also a likely culprit, Mok said.

Children whose parents have a history of psychiatric disease and substance use may also be exposed to other adversities at home, such as inadequate parenting practices, abuse, neglect and financial hardship, Mok told Live Science.

The findings could help researchers identify ways to help prevent people in the next generation from contemplating suicide or turning to violence, she said. For example, psychiatrists and other health professionals who treat adults with mental disorders and suicidal behavior could also consider evaluating the mental health and psychosocial needs of their patients' children, Mok said. These types of early interventions could benefit parents and their children as well, she explained. [5 Myths About Suicide, Debunked]

Specifically, treatments aimed at reducing the effects and incidence of parental misuse of alcohol and illegal drugs may help to reduce their children's future risks for suicide and violence, Mok said.

An editorial accompanying the research in the journal said the new research was an "elegant study" that helps to identify "common parental mental health risk factors for suicide attempts and violent offending in their children." The editorial was written by Dr. David Brent, a psychiatrist at the University of Pittsburgh Medical Center who has studied suicidal behavior in teens, and his colleagues.

Brent said that further research is needed to more precisely define the vulnerabilities that parents may be transmitting to their children that may increase some children's risk of violence and suicidal behavior, while other children in the same household experience neither of these adverse outcomes.

One finding, however, already has plenty of evidence: the benefits of prevention programs to help stem rising rates of mental disorders, violence and suicide attempts, Brent argued in his article. Instead of more research, this area deserves more investment, he said.