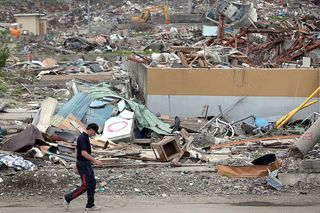 A man walks past the debris on June 12, 2011 in Iwate, Japan, after a 9.0-magnitude earthquake struck the region.
(Image: © Kiyoshi Ota/Getty Images)

A magnitude-6.9 earthquake rumbled through Japan yesterday near where the enormous 2011 Tohoku quake triggered a massive tsunami and caused widespread devastation.

Some seismologists think that the two temblors could be related, with this week's quake considered an aftershock of the magnitude-9.0 earthquake that rocked Japan in 2011. Huge quakes like the Tohoku event can indeed trigger aftershocks that continue for decades, but proving the connection becomes more difficult, as the time between the original earthquake and any subsequent shocks becomes longer.

"Sometimes that's not a parameter we can determine, whether or not it's an aftershock," said Don Blakeman, a seismologist at the U.S. Geological Survey's (USGS) National Earthquake Information Center in Golden, Colorado. [See Photos from the Tohoku Earthquake and Tsunami]

The magnitude-6.9 quake, which hit at about 6 a.m. local time on Nov. 22, was centered about 80 miles (130 kilometers) from the epicenter of the 2011 Tohoku quake. That's within a reasonable range to be an aftershock, Blakeman told Live Science.

And it's not unusual for a large quake to create a sort of domino effect that echoes throughout a fault system for many years, seismologists say.

"There's been a whole sequence [of aftershocks] since the 2011 earthquake. These enormously big earthquakes have aftershocks that can continue for tens to hundreds of years," said Robert Smith, an emeritus professor of geophysics at the University of Utah. "It's very common." [Video: Japan Before the Tsunami and After]

It's likely the recent quake is an aftershock of the big 2011 temblor, according to Morgan Page, a geophysicist at the USGS in Pasadena, California.

"It's not immediately apparent whether this is an aftershock," he said. "It's mostly because Japan is such a seismically active area, they have a lot of large quakes."

There's no hard cutoff or time limit for declaring an earthquake an aftershock. However, aftershocks — as opposed to unrelated quakes — do get harder to determine over long periods of time, Blakeman said.

"Right after a large quake happens and we get a lot more quakes in the same spot — the same kind of earth movement — we can definitely say those are aftershocks," he said. But the relationship might be fuzzier to prove when it's five years later and 80 miles away.

Geoscientists use a method called Coulomb stress calculations to try to determine whether a quake on one fault might increase the stresses on nearby faults, thus raising the risk of future earthquakes, Page told Live Science. However, those calculations can be difficult, because they require a fine-grained knowledge of where the faults are and how much those faults moved.

"It shouldn't be surprising that a large aftershock would occur near the edges of the part of the fault that already ruptured, though — we see that all the time," Page said.

To compare the recent quake to the 2011 event, geoscientists will be looking at the mechanism that caused the quake and the ways in which the faults moved, Blakeman said. However, the question of whether this quake was an aftershock is largely academic, he said.

"The results and effects are the same, whether it's an aftershock or an unrelated quake," he said.

The chances of further quakes being triggered from the magnitude-6.9 temblor are the same as any quake triggering another quake that's at least as large as itself, Page said — about 5 percent. Because earthquakes can't be predicted, the advice for people in seismically active zones remains the same, Blakeman said. People should secure large items and appliances in the home, be ready with a supply of water and critical medications and make a family emergency plan, experts say.