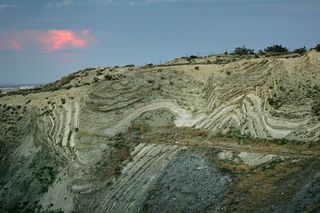 Layers of earthquake-twisted earth stand out where the freeway crosses the San Andreas Fault on June 28, 2006.
(Image: © David McNew/Getty Images)

October is Earthquake Preparedness Month, and people in quake-prone zones all over the world will be practicing their best "drop, cover and hold-on" moves as officials arrange events to remind people that the earth under their feet isn't so stable.

Drills like the Great California Shakeout are one of the main weapons to prevent earthquake deaths, along with strict building codes and other preparedness measures. That's because, despite decades of study, researchers can't predict when an earthquake will strike — so there's no way to evacuate people ahead of time, or even give them a few minutes' warning.

That's not to say that researchers aren't still trying. Scientists are actively monitoring faults and searching for signals that they hope will warn them before something ruptures. At times, the goal has seemed tantalizingly close. In 1980, Congress created the National Earthquake Prediction Evaluation Council (NEPEC), an advisory group that was supposed to evaluate the routine predictions scientists thought might soon be rolling in. Those never materialized. [Image Gallery: This Millennium's Destructive Earthquakes]

"We have not been able to make observations of precursory phenomenon that give any sort of reliable indication that an earthquake is going to come," said Michael Blanpied, a member of NEPEC and the associate coordinator of the Earthquake Hazards Program at the U.S. Geological Survey.

So, why not? Unfortunately, the reason may be that the Earth simply doesn't give off any warning signs before it trembles.

A quick Google search of "earthquake prediction" will lead you to any number of shady sites, where laptop-wielding individuals claim to have cracked the problem. Anyone claiming to pull predictions out of publically available earthquake data is actually pulling your leg, said John Vidale, director of the Pacific NW Seismic Network at the University of Washington in Seattle.

"In something like earthquake prediction that scientists have been working on for 100 years, the answer is not going to jump out of nowhere," Vidale told Live Science.

Beware, too, those who claim to have made successful predictions, but hedge with vague generalities about the size of the quake or the area. According to a newly released report by NEPEC, a successful prediction needs to include unambiguous timing (e.g., "between Jan. 18, 00:00 GMT and Jan. 24, 23:59 GMT, 2019," and not "sometime around the full moon on Jan. 21"); a clear specification of the area (not simply "near" this or that fault); and a magnitude scale (earthquakes are measured logarithmically, so there's a big difference between a 5 magnitude and a 6 magnitude quake). Most people who claim to have predicted quakes in advance fudge these details regularly, Vidale said.

But not everyone with an idea for preventing quakes is a tinfoil-hat type. The geoscience community is skeptical that prediction will ever become a reality, but there are serious researchers who are pursuing the problem.

If any place is the geographical center of this effort, it's Parkfield, California, an unincorporated town along the San Andreas fault. The USGS has been intensively monitoring the rocks at Parkfield since 1985 because earthquakes there seemed so shockingly regular. There were magnitude 6 quakes in 1857, 1881, 1901, 1922, 1934 and 1966 — about every 22 years. Each quake seemed to rupture the same area of the fault, leading geophysicists to believe that the seismicity was predictable. They predicted that another magnitude 6 earthquake would occur in or before 1993. [Photo Journal: The Gorgeous San Andreas Fault]

No quake of that size happened until 2004.

It was a blow to the field of earthquake prediction. Even with close monitoring and a known pattern of previous quakes, researchers couldn't say when Parkfield would shake.

"Part of the reason that it's hard is that the Earth is very complex," Blanpied said. "There's enormous variation in types of rock, in the stresses. There are faults all over the place." Even a prediction in Parkfield wouldn't necessarily have translated to researchers' ability to predict quakes on another fault.

For quake prediction to work, there must be a detectable early signal before the earth starts shaking. It's not clear that such a signal exists, Vidale said.

Faults break when the stress in the crust overcomes the strength of the rock. And the failure point could be very small. It may just be a meter or even a centimeter-size fragment that fails, Vidale said.

"When it's about to break, it apparently doesn't give us any warning," he said. "The process starts in a tiny volume and just runs away at the speed of sound in the rock."

It's like breaking a sheet of glass versus a piece of plywood, Blanpied said. The wood starts to bend and splinter, indicating that a break is imminent. IIf Earth worked that way, prediction would be possible. But it's also possible that the crust is more like a sheet of glass that snaps suddenly.

"There is a precursory process that starts before the point it goes 'snap,'" Blanpied said. "But it's completely unobservable without an electron microscope."

Observation is a problem for earthquake prediction, too. Seismologists can typically measure areas in the half-mile (100 meters) range — and they're watching complex fault zones that are miles underground and hundreds or thousands of miles long. Measuring the stress and strength of an entire fault zone simply isn't possible, especially if the breakage point is as small as a few meters or less.

What's more, laboratory experiments and natural observations have led seismologists to conclude that all earthquakes start in the same way, Blanpied said.

"They all start small, and then some of them get bigger," he said. "And if this is true, it's not very good news for earthquake prediction."

Unless there's something fundamentally different about how big and little quakes start, he said, it's no good predicting that a temblor is coming: It's most likely to be a magnitude 1 or 2, undetectable without scientific instruments.

Earthquakes in the air?

Still, the search for precursors to earthquakes has led to odd places. Scientists have looked — unsuccessfully — for earthquake "hums," for unusual gas emissions, for trends in seismicity patterns. They've even turned to the ionosphere, or the layer of the atmosphere between about 50 and 600 miles (80 to 1,000 kilometers) above Earth's surface. One provocative line of recent research emerged after the magnitude 9.0 Tohoku earthquake that spawned an enormous tsunami in 2011. Kosuke Heki, a professor at Hokkaido University in Japan who uses satellite and other remote-sensing techniques to study the Earth, found that there was a disturbance in the ionosphere 40 minutes before the quake.

"I would not have believed this if this preseismic ionospheric change had been discovered by somebody else," Heki told Live Science.

No one knows why the ionosphere would change in this way before a major quake. One idea, Heki said, is that when rock is stressed, positive charges might be released and gather on the Earth's surface, pulling on the negatively charged electrons in the ionosphere and rearranging them. However, the charges so far don't seem strong enough to cause massive ionospheric change.

"There are difficulties," Heki said.

There is also disagreement about how to statistically analyze the ionospheric changes against the natural background fluctuation of the atmosphere. One 2015 paper, for example, argued that Heki and other researchers studying the ionosphere are measuring nothing more than typical electron fluctuation, and that these changes aren't predictive at all. Heki and his team continue to study the phenomenon, but the burden of proof is heavy.