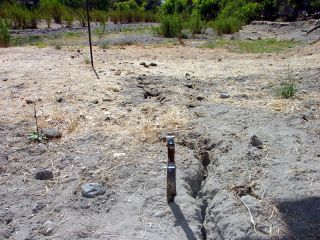 A crack in the earth made by the 2004 Parkfield earthquake that ruptured along the San Andreas Fault.
(Image: © USGS.)

Forecasting earthquakes has long been an elusive goal for geoscientists, even along the San Andreas Fault, one of the most well-studied and active earthquake faults on Earth.

Detecting changes in the Earth's crust before a quake is one way to determine whether faults send out early warning signals, which could offer the possibility of short-term earthquake predictions.

One way to potentially detect these warning signals is using a process called ambient noise tomography. Vibrations from ocean waves and the wind make the Earth constantly hum. Scientists can tease out detailed images of the Earth's crust from the murmuring as the velocities of the vibrations change as they move through different rock types.

"The ambient noise in the Earth is just sound waves. It illuminates the structures in the Earth like ambient light illuminates a room," said seismologist David Schaff, a professor at Columbia University's Lamont Doherty Earth Observatory in New York. Ambient noise monitoring has already been used to monitor volcanoes for potential eruptions. Schaff has been working toward adapting the technique to finding changes near faults that could forecast earthquakes. Schaff went looking for signs of trouble brewing in Parkfield, Calif., where seismologists closely track the San Andreas Fault. Though Schaff didn't find any premonitory changes in the rocks, he did boost the sensitivity of the ambient noise search technique, making it easier to quickly and cheaply repeat the hunt in other areas.

"Ambient noise is really great because it's free and can be applied anywhere you have a dense network of seismic stations," Schaff told OurAmazingPlanet.com.

Parkfield makes a good test case for ambient noise tomography. Thanks to its moderate earthquakes at somewhat regular intervals, the area's rolling hills host a long-running experiment to capture and record an earthquake in real-time. A magnitude 6.0 temblor hit on Sept. 28, 2004, almost 20 years after monitoring started.

No one has yet found evidence of obvious precursors to the Parkfield quake. But Schaff went back to the seismic data in hopes that ambient noise tomography, a relatively new process, might ferret out a subtle change.

However, one problem with ambient noise is that the seismic signal is stronger averaged over long time periods, while quake portents may come just before shaking starts. So Schaff first worked on improving the technique so he could examine ambient noise on the scale of a day, rather than a month. [Video: Listening to an Earthquake]

"A pre-seismic signal may be really short, on the order of a few days or weeks before the event," Schaff said. "That's why I was trying to push the limits of averaging down to one day."

But whether it was one day or 30 days, Schaff found no evidence of changes along the San Andreas Fault in the region covered by the Parkfield seismometers. Unless there were small shifts outside the network, or just before the quake, it’s likely the 2004 earthquake had no early warning signs, Schaff said. His study appears in the August 2012 issue of the Bulletin of the Seismological Society of America.

"I think with this technique you would have been able to see small changes that wouldn't have shown up in previous studies," said David Shelly, a seismologist with the U.S. Geological Survey at Menlo Park, Calif., who was not involved in the study.

Not all scientists agree on whether earthquake forecasting is even possible, though.

"Some people think earthquakes are unpredictable, they think it's chaotic and the statistics are completely random. Other people think there might be ways you could monitor earthquakes even if you can't predict them, by measuring changes in the preparation stages leading up to them. That was my hope," Schaff said.