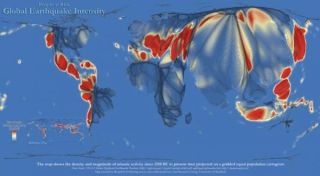 A recently created World Earthquake Intensity Map shows where people around the globe are most at risk from dangerous seismic activity.
(Image: © Benjamin Henning)

Ask any geoscientist about predicting earthquakes, and they'll tell you it's risky business. After balking at the word "predict," they may begin to speak in terms like "levels of uncertainty," "low-probability events" and "inexact art."

And they're right to be wary.

A team of six seismologists is currently on trial in Italy for failing to predict the magnitude-6.3 quake that hit the city of L'Aquila in April 2009. Prosecutors argue that the seismologists gave the public imprecise and incomplete information ahead of the deadly earthquake, which killed 309 residents. Despite an international petition signed by nearly 5,000 scientists in support of the seismologists, if the prosecution wins the case, they will be convicted of manslaughter.

The Italian seismologists could not have predicted the earthquake, even though the area is a highly seismically active one, scientists say. There is still too much about the inner workings of earthquakes and what sets them off that remains a mystery.

And while we may want to know when and where the next "big one" will hit — especially as we near the one-year anniversary of the magnitude 9.0 earthquake that devastated Japan — that precision is beyond the scope of earthquake science right now. [7 Craziest Ways Japan Quake Affected Earth]

"Essentially we don't know where or when the next major earthquake will hit, and one just has to live with that uncertainty," said Brian Atwater, a geologist with the U.S. Geological Survey.

Geophysicists and seismologists worldwide recognize that certain areas of the globe are more prone to seismic activity than others (the infamous "Ring of Fire" around the Pacific Ocean, for example). Scientists also know that many of the planet's tectonic boundaries seem to generate earthquakes on pronounced — but varying — seismic schedules.

But geoscientists still face the challenge of using the tools at their disposal to interpret earthquake risks without inciting widespread panic or false senses of security.

Methods to the madness

Ancient sediments can tell very detailed stories about past earthquakes and tsunamis, and sediment analysis is one of the most basic tools geologists use in interpreting these historical earthquakes and the seismic patterns in a particular region.

"Sediment cores can typically take you back about 5,000 years," said Ian Shennan, a geography professor at Durham University in England. "Layers of mud and peat can help us reconstruct the timing between earthquakes and their spatial extent, and from that you can begin to deduce the dynamics of the earthquake cycle."

Much of Shennan's research has focused on sea level changes associated with the Aleutian Megathrust, a subduction zone (where one tectonic plate is being shoved beneath another) off the coast of Alaska. This zone produced a magnitude-9.2 earthquake in 1964 — the largest earthquake in North American history. [10 Biggest Earthquakes in History]

Native traditions and historical documents can also provide important clues about the size and locations of past earthquakes. Geophysicists recently used documents from historical settlements in Haiti and reports from the Spanish government to tease out a centuries-long cycle of earthquakes on the island of Hispaniola.

Historical documents describing a massive tsunami in Japan in 1700 — called "the orphan tsunami" because Japan's residents felt no accompanying earthquake — also helped scientists recognize the potential for a major earthquake along the northwestern coast of North America, near current-day British Columbia, Washington, Oregon and California, because that is where the earthquake that triggered the tsunami actually occurred.

"Understanding the Cascadia earthquake of 1700 is one of the success stories," Atwater told OurAmazingPlanet.

"It's an example of geophysical intuition followed by geological mucking around in estuaries, dovetailing with a long tradition of historical research looking at Native American traditions and old documents in Japan to figure out earthquake and tsunami history," Atwater said. "All that stuff came together to paint a picture of a hazard that would otherwise take this region by surprise someday."

Though far from the world of historical documents and Native American legends, forecast models are another type of tool that has helped scientists calculate earthquake risks.

"Most models now use the rates of small earthquake activity to try to forecast whether there will be a major earthquake or not," said John Rundle, an earthquake dynamics expert at the University of California, Davis.

"Our new forecast still uses the rate of small earthquake activity, but it also uses the time since the last earthquake," Rundle said. "If you include both of those effects, essentially you see a very nice pattern of a buildup in probability prior to the earthquake, and then a sudden fall after the earthquake."

A major benefit of automated models like this, Rundle explained, is that they can be back-tested against existing earthquake data to determine how accurate the forecasts are.

Seismologists know as well as anyone that more answers often lead to more questions, and most are loathe to pin down specific dates and locales of future quakes.

"It's a pretty murky science, predicting when the next one's going to occur," Shennan, of Durham University, said.

"It makes me feel somewhat useless as a scientist" said Atwater.

But the experts do have some answers.

For example, scientists' understanding of recurrence intervals, the time between major earthquakes on a particular fault, is advancing steadily.

The recurrence interval for the Aleutian Megathrust, which generated the 1964 Alaskan quake, averages somewhere around 600 years, according to Shennan's research.

"These quakes are usually centuries apart — that's certainly what the geological evidence would suggest," Shennan said. "It's been about 50 years since the last one, so we're some way off — unless we're misunderstanding everything — from another big one generated in that area."

Hispaniola also seems to cycle through intervals of relative quiet lasting 50 and 240 years between major quakes.

But seismically active areas such as Japan and southern California may not be so lucky.

As for Japan, Rundle's forecasts are even less encouraging.

"There's a very high probability of a magnitude-6.0 or larger sometime within the next year. In fact, the probability right now is as high as it's ever been," he said. "I'm expecting something pretty soon."

Rundle and the other experts agree that the key to mitigating earthquake damage isn't relying on perfect prediction, but responsible public awareness and emergency preparedness.

"No subduction zone long enough to make a giant earthquake should be considered incapable of making such an earthquake," Atwater said. "We can't guarantee that any particular region is in danger or is absolutely safe."

"There are so many uncertainties in science, and people always crave forecasts that are exact," he added, "but this unfortunately is one of those areas that's particularly inexact."