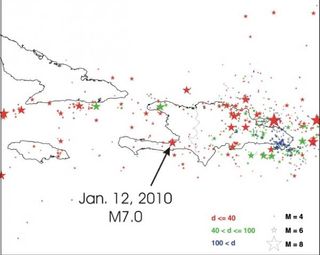 The magnitude-7.0 earthquake that shook Port-au-Prince, Haiti, two years ago nearly demolished the city and took both residents and geologists by surprise.

Now, a team of scientists thinks they’ve identified a centuries-long pattern of earthquakes on the island of Hispaniola, which comprises both Haiti and the Dominican Republic, that could portend earthquakes to come.

Although past seismic activity can’t be used to predict future quakes, the findings may help residents and those hoping to rebuild Port-au-Prince prepare for the next big one, said William Bakun, a geologist with the U.S. Geological Survey in Menlo Park, Calif.

"People shouldn't be surprised if, in the decades to come, there are more very damaging earthquakes in the region," Bakun told OurAmazingPlanet, "and they should plan and build accordingly."

Bakun and his colleagues gathered historical records — letters, drawings, newspaper clippings and more — from residents of Hispaniola since the time that Christopher Columbus dropped anchor at the island. From descriptions of shaking and damage, Bakun was able to estimate the intensities, magnitudes and locations of historical earthquakes. [The Worst Natural Disasters Ever]

"It was in the interests of the Spanish colonies to report all damage back to the king," Bakun explained, "because he was in the habit of supplying them funds to rebuild critical facilities, cathedrals and the like. So there are actually very detailed records of Hispaniola's earthquakes."

A critical part of the analysis was comparing people's accounts of shaking in the historical tremors to what residents reported feeling in the 2010 earthquake, Bakun said. From that, the team was able to understand how seismic waves travel through the island, which helped them estimate the sizes and locations of the historical quakes.

Hidden in the historical data, the team found a striking pattern of quakes and quiescence.

From about 1500 to 1701, the records mention no seismic activity. Then, in 1701, an estimated magnitude-6.6 earthquake struck west of Port-au-Prince. Bakun and his team pinpointed that quake to the east-west trending Enriquillo fault, the same fault thought to have ruptured in the 2010 earthquake. The accounts of shaking and damage in 1701 were also very similar to those of the 2010 quake, Bakun said.

The region was then quiet for another 50 years, until a devastating magnitude-7.5 earthquake struck the eastern end of the Enriquillo fault in October 1751, in the Dominican Republic. A month later, a magnitude-6.6 quake shook Port-au-Prince again, followed by a magnitude-7.5 earthquake on the western end of the Enriquillo fault in 1770. Finally, the fault went silent for 240 years, until the 2010 quake.

"The entire Enriquillo fault system ruptured during these 70 years of earthquakes, then it shut off," Bakun said. "We're certainly not suggesting that things will repeat precisely as they did in the 18th century, but history tells us that we shouldn't be surprised if we have intervals — in the 18th century it was 50 years — of quiet before the next one really takes off.”

Most importantly, residents and engineers should rebuild Port-au-Prince with an eye toward future seismic activity, Bakun said.

"The consensus is that the quality of construction and building practices were not sufficient for the 2010 earthquake," Bakun said. "We certainly know how to build buildings that can withstand that kind of an earthquake, but the construction practices that have been in place in the region don't cut it."

The team's findings will appear in the February issue of the Bulletin of the Seismological Society of America.