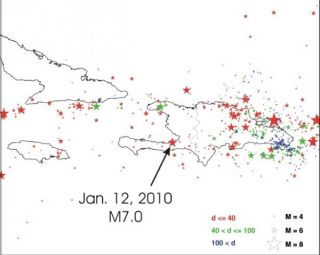 The maps include data from the region's major faults and subduction zones where tectonic plates collide. The scientists measured how fast these seismically active areas are moving and estimated how often earthquakes will strike and how much shaking will occur when a quake hits again. [Infographic: How the Haiti Earthquake Happened]

The Haiti quake was a magnitude-7.0 temblor that ruptured on Jan. 12, 2010. It killed more than 200,000 people and left more than 1.5 million homeless. The hazard maps can be used as the scientific basis for new building codes in the country. But ultimately, those decisions are up to Haiti.

"It doesn't say whether to build or not," said study team member Arthur Frankel of the U.S. Geological Survey. "It just tells what the hazard is."

The highest hazards in Haiti are along the Enriquillo-Plantain Garden fault, the fault that unleashed the 2010 quake, and the Septentrional fault. The western end of the Muertos Trough is also a high-risk zone, according to the maps.

The big faults are the most likely hazardous, but substantial seismic hazards spread throughout Haiti, and there are other faults that seismologists still know little about.

"We try to stress that there's a lot of uncertainly," Frankel told OurAmazingPlanet.

This story was provided by OurAmazingPlanet, a sister site to LiveScience. Reach OurAmazingPlanet staff writer Brett Israel at bisrael@techmedianetwork.com. Follow him on Twitter @btisrael.