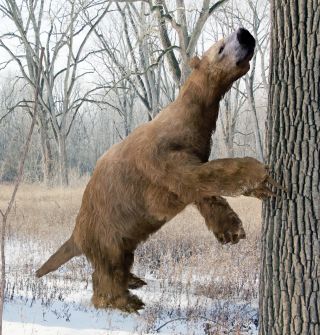 The giant ground sloth was an herbivore and preferred living in forests along rivers or lakes.
(Image: © AuntSpray | Shutterstock )

Giant ground sloths were large, lumbering beasts that lived in the Americas during the Ice Age. They were directly related to today's modern sloths. They were also distantly related to anteaters and armadillos.

One species of ground sloth is named after Thomas Jefferson. The future third president had a well-known interest in fossils, and a friend had sent him some bones that had been found in a cave in West Virginia. Jefferson first thought the bones belonged to a large lion and called it the "Great Claw," or Megalonyx, according to the Thomas Jefferson Encyclopedia. In 1797, as he was preparing a paper on the find for the American Philosophical Society, he saw an engraving of a sloth skeleton and realized that his fossil was similar and that his classification was wrong. Later, Jefferson was credited with discovering the extinct sloth, which was named Megalonyx jeffersonii.

The six modern species of sloths are all arboreal, so they are called tree sloths. These sloths are small-bodied and weigh less than 20 pounds. Many of their extinct relatives were much larger and lived on the ground. Because of this, they are referred to as ground sloths.

Megalonyx jeffersonii was the largest of the ground sloths in family Megalonychidae, reaching the size of an ox when fully grown, said Ken Wilkins, an associate dean for sciences and professor of biology at Baylor University. Megalonyx sloths grew to around 9.8 feet (3 meters) long and weighed up to 2,205 lbs. (1,000 kilograms), according to the San Diego Zoo.

Giant ground sloths preferred forests along rivers or lakes, but they also lived during the Pleistocene period, also known as the Great Ice Age. At its peak, as much as 30 percent of the Earth's surface was covered by glaciers and parts of the northern oceans were frozen, according to the San Diego Natural History Museum.  This made for a very cold environment that few animals could endure.

By the end of the Great Ice Age, around 11,700 years ago, many believe that the giant ground sloths had become extinct. Some argue that they were around for many more thousands of years, though, surviving on islands in the Caribbean.

Ground sloths were herbivores, meaning they ate vegetation. Their peg-like teeth were ideal for this diet, but they also had other body parts that played a large part in their meals. "They had long curved claws, likely an adaptation for foraging for grabbing branches and stripping foliage from tree limbs, as well as for protection from predators," Wilkins told Live Science.

Their hind foot structure and posture of the ground sloths also helped it with meal time. They likely relied on their robust hind feet, in combination with a stout tail, to support their massive bodies when rearing on their hindquarters to reach high into trees for forage, Wilkins explained.

Megalonyx fossils have been recovered from about 150 sites across North America, according to the Illinois State Museum. Some have been found as far north as Alaska and the Northwest Territories of Canada. They have also been found in California, Arizona and New Mexico, as well as northern Mexico. In the Midwest, most of them have been found in caves, including sites in Missouri, Minnesota, Illinois, Ohio, Kentucky and Tennessee.