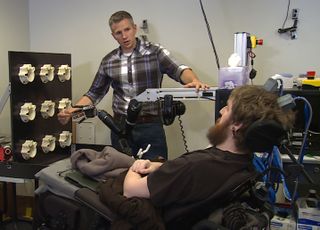 A device that was implanted in a man's brain has restored his feelings of touch, according to a new study. This is the first time such a device has been used to restore a sense of touch in a person with a spinal cord injury, the researchers said.

The patient, although paralyzed by his injury, could experience the sensations through a mind-controlled robotic arm connected directly to his brain, the researchers said.

The man, Nathan Copeland, lives in western Pennsylvania. In the winter of 2004, he was driving at night in rainy weather and was in a car crash that snapped his neck and injured his spinal cord. The crash left Copeland, then 18, with quadriplegia from the upper chest down. He was unable to feel or move his legs or lower arms, and needed assistance with all of his daily activities. [5 Amazing Technologies That Are Revolutionizing Biotech]

"I don't have any finger movement, or thumbs — just kind of have fists, which I still get along with," Copeland said. "I can still type. I type with the knuckles of my pinkies."

At the time of the crash, Copeland was in his first year of college, pursuing a degree in nanofabrication. But health problems forced him to put his degree on hold. After the car crash, he enrolled in a registry of patients willing to participate in clinical trials.

In the spring of 2015, Copeland had two electronic chips, each about half the size of a shirt button, implanted into a part of his brain called the somatosensory cortex, which controls touch, including in the hands. Each chip had an array of 32 needle-like electrodes about 2 microns wide, or about one-fiftieth the diameter of the average human hair, developed by Blackrock Microsystems in Salt Lake City. These electrodes could electrically stimulate neurons in his brain to recreate his perception of touch while bypassing his spinal cord injury.

"To date, all attempts to restore sensations of touch through brain implants have either been done in animal experiments or have used very large electrodes during existing operations," said Robert Gaunt, a senior author of the study and a neuroengineering researcher at the University of Pittsburgh.

Previous research using this new technique with much smaller electrodes, known as intracortical microstimulation, had looked promising in studies on animals. However, it was uncertain whether the artificial sensations would feel natural to a person.

Researchers have learned about human sensations from brain surgeries done with the patient awake, in which "they stimulate the brain and ask people what they feel," Gaunt told Live Science. But typically, the electrodes used in those surgeries are 1,000 times larger than the electrodes the researchers used in Copeland's implants, Gaunt said. "These large electrodes generate buzzing sensations that come from large areas of skin, typically — for example, the whole hand," he said. "It does not feel normal."

In other work, researchers have restored sensations of touch in the arms of people with amputations by stimulating nerves in the remaining parts of their arms. However, such work could not help restore touch in people with spinal cord injuries, who have damage in the central nervous system, Gaunt said. [10 Things You Didn't Know About the Brain]

In the new study, in experiments done over the course of six months, the researchers found that the brain implants could indeed evoke natural-feeling sensations, such as warmth and pressure, in Copeland's hands. Moreover, they found that he felt as if those sensations originated in his upper palm and the base of the four fingers on his right hand.

"I can feel just about every finger — it's a really weird sensation," Copeland said about a month after the surgery to implant the devices, in a video provided by the university. "Sometimes it feels electrical, and sometimes it's pressure. But for the most part, I can tell most of the fingers with definite precision. It feels like my fingers are getting touched or pushed."

Copeland reported over the course of the experiments that 93 percent of the sensations felt "possibly natural" — for instance, like pressing a cotton swab on the surface of his skin.

"When he clearly says 'index finger,' 'middle finger' or 'pinky finger,' it was many years of work to get to that moment, and I think that there are a lot of people who are very excited to see that it was working like we expected it to," said study co-author Jennifer Collinger, a bioengineer at the University of Pittsburgh.

Copeland also was able to sense touch when the brain implant was connected to a prosthetic limb. He correctly identified, 84 percent of the time, which of the prosthetic fingers was touched while he was blindfolded.

"I couldn't see, but it felt like I was getting my fingers touched or pushed," Copeland said.

Copeland also has another pair of electrodes implanted in his motor cortex, the part of the brain that controls voluntary movements. In other experiments, Copeland could use his mind to dexterously control a robot arm built by researchers at Johns Hopkins University in Baltimore, Gaunt said.

"We still have a lot of work to do before this type of technology would become available," Gaunt said. "Our participant is really a pioneer and is doing this work with us to benefit future people that suffer these terrible injuries."

"The ultimate goal is to create a system which moves and feels just like a natural arm would," Gaunt said in a statement. "We have a long way to go to get there, but this is a great start."

The scientists detailed their findings online Oct. 13 in the journal Science Translational Medicine.