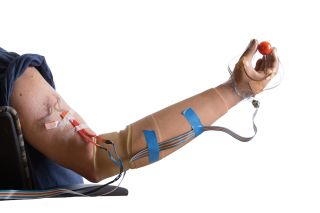 The new prosthetic arm allows amputees to hold a delicate object without crushing it, and distinguish among different textures.
(Image: © Russell Lee)

The sensations that many people take for granted — the featherweight feel of a piece of fruit, that lets you hold a cherry without crushing it, or the soft touch of a loved one's hand — are beyond the reach of many amputees. But a new kind of prosthetic could restore sensation for people who have lost a limb, as well as relieve their pain, researchers say.

One patient who tried the new prosthetic said he can now feel textures such as cotton balls and sandpaper again. Igor Spetic lost his right hand in an industrial accident four years ago, but when he wears the prosthetic hand, the device stimulates the nerves in his upper arm, allowing him to feel.

What's more, after he began using the prosthetic, Spetic no longer felt the phantom limb pain he had suffered since his injury.

A second patient who lost his right hand and forearm in an accident, Keith Vonderhuevel, also said that most of his phantom limb pain disappeared after he began using the new prosthetic, according to the study, published today (Oct. 8) in the journal Science Translational Medicine. [See Video of "Feeling" Prosthetic Hand]

It's not the first prosthetic to restore touch to an amputee, but it may provide a more "natural" sensation than earlier devices, said head researcher Dustin Tyler, a biomedical engineer at Case Western Reserve in Cleveland, Ohio. The device's system has now been in testing for more than two years.

When Spetic and Vonderhuevel lost their arms, the connections to the muscles and the nerves in their hands were severed. The new prosthetic is covered in pressure sensors, and it works by sending electrical signals from these sensors to the intact nerves in what remains of the patient's arm. The brain interprets these signals to mean the patient has a hand that is touching something.

In the study, a team of surgeons implanted three electrode cuffs around the nerves in Spetic's forearm and two cuffs in Vonderhuevel's arm, and connected the cuffs to the prosthetic arm by wires through the skin.

The cuffs allowed Spetic and Vonderhuevel to feel 19 and 16 distinct points on their prosthetic hands, respectively. For example, one sensation point might correspond to the index finger.

Often when a nerve is stimulated using electrodes, patients report that the sensation feels tingly or prickly, a bit like having pins and needles, Tyler said. But in the new device the engineers varied the pattern and intensity of the stimulation — a technique that hadn't been used before — and found the system was able to deliver sensation that felt much more natural, he said.

"When we first turned the stimulation on, the subject reported that it was the first time he had felt his hand since the accident," Tyler said.

After that first time, the researchers continued to fine-tune the stimulation, to allow the patients to feel different textures. "We don't believe the way we're stimulating the nerves is exactly natural," Tyler said. "But if there's something close, the brain likes to interpret it as something it knows."

They developed the device to the point at which Spetic, while blindfolded, could tell the difference between sandpaper, a smooth surface and a ridged surface with his touch-sensitive prosthetic hand. He could even distinguish between two different textures on different parts of the hand at the same time, the researchers said.

Vonderhuevel tried holding grapes or a cherry in his prosthetic hand without dropping or breaking them, both with and without the electrical stimulation."When the sensation's on, it's not too hard," he said in a statement. "When it's off, you make a lot of grape juice."

No pain, all gain

Both patients suffered from phantom limb pain, a sensation that seems to emanate from the missing limb (Spetic described his pain as a vice crushing his fist). Yet unexpectedly, both Spetic and Vonderhuevel reported that their pain has almost totally disappeared since they started using the new prosthetic, even when the stimulation is turned off.

"We don't know if it's because now that they're getting natural feedback, the brain is reincorporating the [prosthetic] hand, or because of other mechanisms," Tyler said, but "it doesn't appear related to the stimulation directly."

The prosthetic has been working for two-and-a-half years for Spetic and one-and-a-half for Vonderhuevel, while other devices that aim to do the same thing have been used by patients for a month or less.

To date, the patients have only used the device in the lab, but in the future, the researchers would like to develop a fully implantable system, like a pacemaker, which patients could use in their own homes. Tyler also hopes that more sophisticated sensors will be developed that can detect what the prosthetic hand is touching.

While the technology still has to clear regulatory hurdles before it makes it to market, it could be available within five to 10 years, Tyler said.