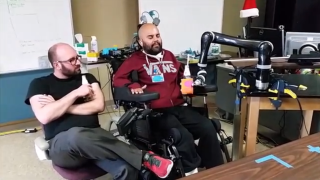 Erik G. Sorto wanted to be able to drink a beer at his own pace. Here, Sorto issues stop and go brain signals for a sequence of actions programmed by the computer system. He controls the neurons need to signal the action with his brain, and the prosthetic arm carries out the actions. In this work, researchers at Caltech collaborated with colleagues at Johns Hopkins University.
(Image: © Caltech, Keck USC, Rancho Los Amigos Team)

Mind-controlled prosthetic limbs have been a reality for a few years, but researchers have not found ways to give the people who use them the same, smooth motor control that people have over their natural limbs.

Now, a team of researchers says the members have solved part of the problem of smooth motor control by connecting an artificial limb to a different part of the brain. Previous designs for mind-controlled prostheses linked the artificial limb to either the person's motor cortex or the individual's premotor cortex, which both translate signals from the brain to the limbs.

This time, the connections to the robotic arm were wired into a patient's posterior parietal cortex, which is located on the side of the head near the ear.

"The [posterior parietal cortex] forms the initial plans to make movements," said Richard Andersen, a professor of neuroscience at the California Institute of Technology and one of the researchers who developed the new prosthesis. For example, when a person decides to grab a coffee cup, the posterior parietal cortex outlines the steps in movement, then, the motor cortexes translate that plan into actual signals that are sent to specific parts of the arm.

The researchers used signals from the posterior parietal cortex "to extract the intent of the subject," Andersen told Live Science. "Instead of 'I want to control muscles,' we can use smart robotics to work out the fine details" of the movement a person wants to make.

In a report published in the May 22 issue of the journal Science, the researchers explain how they connected the posterior parietal cortex of one patient, Erik G. Sorto, to a computer that acted as a kind of artificial motor cortex. The computer used specific signals from the parietal cortex to detect what kind of movement Sorto intended to make, and then translated that into signals for the robotic arm. [Video: Tetraplegic Patient Controls Robotic Limb With His Brain]

In a video by the researchers, Sorto used the arm to serve himself a beer.

Sorto's ability to sip a brew came from the fact that the signals from the parietal cortex told the computer the general trajectory of the movement Sorto wanted to make, and the computer could smooth out the movements of the artificial arm so that they resembled those of a real arm. Other brain-connected bionic arms have aimed at decoding the motor signals involved with individual movements, such as trying to raise an arm by imagining an individual muscle contracting, but in the new prosthesis, the computer looked at the whole picture of what Sorto intended to do — just "get the beer," Andersen said.

Sorto can't take the arm home and use it every day just yet — the prosthesis is still resting on a table in the lab for further research. But Anderson said he hopes that the researchers can get approvals so that Sorto can use it outside the lab.

Andersen is working with two other patients in the United States who also have prostheses that include neural implants. One even gets some feedback from the arm — a sense of touch, Andersen said. For the new prosthesis, it isn't clear yet what such perception could "feel" like for a user, because there are many components that go into a person's perception of his or her own body. But it is important to have such feedback for bionic limbs to work properly. "If you anaesthetize your fingers, you find fine motor control difficult," he said.

Dan Moran, associate professor of biomedical engineering at Washington University in St. Louis, said he was a bit skeptical that the new prosthesis provided any finer motor control than already-developed methods of connecting with bionic arms through motor and premotor cortexes.

But the new prosthesis was successful in that "they are decoding both [the movement's] trajectory," and the goal of that movement, said Moran, who studies motor control and prostheses but was not involved in the new research. In the new prosthesis, "what is different is the brain area used: [posterior parietal cortex] versus the premotor," he said.

Krishna Shenoy, a professor of electrical engineering who studies neural prostheses at Stanford, was enthusiastic about the new prosthesis. "This is clearly the very first recordings from [the] posterior parietal cortex in humans in the context of qualifying the signals for use in prostheses," he said. "It is important to investigate many brain areas for potential use in prostheses, as different areas may well have different advantages."

"This is an excellent example of this important biomedical science and engineering research path in action," Shenoy said.

Andersen said he plans to keep working on refining the system. Another step will be to give the patient control over individual digits.

Eventually, some combination of techniques could make bionic arms a reality for many patients. "[Sorto] was pleasantly surprised at the increase in his quality of life," Andersen said.

The study appears in the May 22 issue of the journal Science.