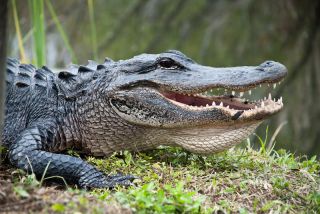 Modern American alligators crawling around today in the swampy grounds of the Southeast U.S. don't look much different than their ancient ancestors did, recent research suggests.

The findings from fossils show that these scary creatures look pretty much the same as their ancestors did 8 million years ago. With the exception of sharks and a few other animal species, there are not many other living vertebrates that have changed as little as the gators have, the researchers said.

"If we could step back in time 8 million years, you'd basically see the same animal crawling around then as you would see today in the Southeast," study co-author Evan Whiting, a former undergraduate student at the University of Florida, said in a statement. "Even 30 million years ago, they didn't look much different." [Alligator Alley: Pictures of Monster Reptiles]

The American alligator has survived fluctuations in sea levels and the drastic changes in climate that have occurred in the Southeast over these last 8 million years. The changes would likely have caused less resilient animal species to go extinct, the researchers said.

The researchers also looked at the composition of teeth that belonged to ancient alligators, and the teeth of extinct crocodiles. The presence of both the gator and croc fossils in several places in north Florida may mean that the two species lived next to each other many years ago in areas near Florida's coast, Whiting said.

However, based on their analysis of the teeth, the researchers concluded that the croc was a marine reptile, which went hunting for prey in the ocean, whereas the alligators typically went looking for snacks on land and in freshwater.

Despite being resilient to climatic changes in the distant past, modern alligators now face another threat that may prevent them from thriving: humans. For example, the reptiles were nearly hunted to extinction during the early 20th century, the researchers said.

Since then, special protections have been put in place that have helped to increase gator numbers in the wild, the researchers said. However, many alligator habitats are currently being destroyed because humans are moving into these areas, the researchers said. This in turn increases the chance of encounters between gators and humans, which can be deadly for either species.

"The same traits that allowed alligators to remain virtually the same through numerous environmental changes over millions of years can become a bit of a problem when they try to adapt to humans," Whiting said. "Their adaptive nature is why we have alligators in swimming pools or crawling around golf courses."