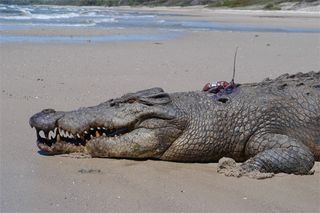 A 15.8 foot long (4.8 meters) male estuarine crocodile is ready for release with its satellite transmitter to track its long-distance travel. Copyright: Australia Zoo

How did the world's largest living reptile, the saltwater crocodile, reach so many South Pacific islands separated by huge stretches of water despite being a poor swimmer?

Apparently, like a surfer catching a wave, these goliaths can ride currents on the ocean surface to cross large areas of open sea, researchers now reveal.

The saltwater or estuarine crocodile (Crocodylus porosus) is a ferocious giant that can grow at least 23 feet long (7 meters) and weigh more than 2,200 pounds (1000 kilograms). These scaly monsters have been known to devour sharks, and even attack things they can't eat, often assaulting boats in the mistaken belief they are rivals or prey, biting down with nearly 2 tons of pressure — powerful enough to crush bone or punch through aluminum hulls.

These deadly predators hunt in tropical areas throughout eastern India, southeast Asia, northern Australia, and on an untold number of the islands in-between. Although these crocodiles spend most of their lives in saltwater, they cannot be considered marine reptiles the same way sea turtles are, because the crocs rely on land for food and water.

There were already many anecdotal accounts of large crocodiles sighted far out at sea, but nothing confirmed. Now, for the first time, using sonar transmitters and satellite tracking, scientists now find that saltwater crocodiles actually do ride surface ocean currents for long-distance travel, enabling them to voyage from one oceanic island to another.

"Because these crocodiles are poor swimmers, it is unlikely that they swim across vast tracts of ocean," said researcher Hamish Campbell, a behavioral ecologist from University of Queensland in Australia. "But they can survive for long periods in saltwater without eating or drinking, so by only traveling when surface currents are favorable, they would be able to move long distances by sea."

Working at the remote Kennedy River in northeastern Australia, the team of scientists — which included the late Steve Irwin, "The Crocodile Hunter" — tagged 27 adult seawater crocodiles with sonar transmitters, employing 20 underwater receivers deployed along a 39-mile-long stretch of the river (63 km) to track the reptiles' every move for more than 12 months. They found both male and female adult crocodiles undertook long-distance journeys, regularly traveling more than 30 miles (48 km) from their home area to the river mouth and beyond into open sea.

The scientists also discovered the "salties" always began long-distance travel within an hour of the tide changing, allowing them to go with the flow. They halted their journeys by hauling out onto the river bank or diving to the river bottom when the currents turned against them.

The researchers originally were just aiming to investigate the territorial habits of the crocodiles and how they divvied up land among themselves.

"I never thought they would be making these long-distance journeys out to sea," Campbell told LiveScience.

After they made their discovery on the river, Campbell and his colleagues re-analyzed archival data from the few crocodiles that have been satellite tracked while undertaking ocean travel. By overlaying the reptiles' movements with surface current estimates, they found the strategy of ocean-swimming crocodiles was similar to what they employed with rivers.

One satellite-tagged crocodile, 12.6-foot-long male (3.8 meters) — left the Kennedy River and travelled 366 miles (590 km) over 25 days, timing its journey to coincide with a seasonal current system that develops in the Gulf of Carpentaria.

Another croc — a 15.8-foot-long male (4.8 meters) — traveled more than 255 miles (411 km) in only 20 days through the Torres Straits, which are notorious for strong water currents. When the reptile arrived at the straits, the currents were moving opposite to his direction of travel — he then waited in a sheltered bay for four days and only passed through the straits when the currents switched to favor his journey.

These findings could explain why this crocodile species did not split into many other species despite occupying islands across such a large range, where in principle populations could have been isolated and diverged from their relatives over time.

"Regular mixing between the island populations probably occurs," Campbell said. "Crocodilians have crossed major marine barriers during their evolutionary past."

Although scientists now know that salties seem to make long-distance journeys on purpose, "we presently do not know what these are for," Campbell noted. However, it was recently discovered that considerable numbers of the reptiles congregated to feast on an annual fish migration, so these long trips might be a way for the predators to satisfy their hefty appetites.

The scientists will detail their findings June 8 in the Journal of Animal Ecology.