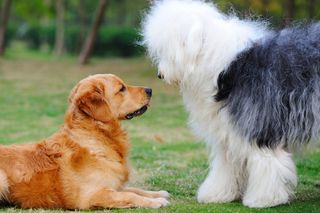 If you have ever wondered whether Fido appreciates you solely because you feed him or because you share a special bond, you may want to know the latter could indeed be the case, a small new study suggests.

In the study of 13 dogs, researchers found that, when given a choice of being praised by their owners or receiving food, most of the dogs either preferred the praise or appreciated both equally.

"We are trying to understand the basis of the dog-human bond and whether it's mainly about food or about the relationship itself," study co-author Gregory Berns, a neuroscientist at Emory University in Atlanta, said in a statement.

Only two of the dogs in the study seemed to care about the food more than they did about praise from their owners, Berns said. [10 Things You Didn't Know About Dogs]

The researchers then showed the dogs these objects while scanning the animals' brains and measuring how their brains responded to the sight of the different objects. Four of the dogs' brains responded more strongly to the object that symbolized praise from the owner, compared with the object that symbolized the food. And nine of the dogs showed similar brain responses for both the object associated with praise and the one associated with food.

The researchers then conducted another experiment. They placed the dogs in a maze made of baby gates that was shaped like the letter Y. The dogs were placed at the base of the Y and could choose to walk down one path, which led to their owner, or down the other, which led to a bowl of food.

Future studies should look at whether a dog's breed or genetics, or how it was raised, may influence its preference for food versus praise.

The new findings point to "the importance of social reward and praise to dogs," Berns said. "It may be analogous to how we humans feel when someone praises us."