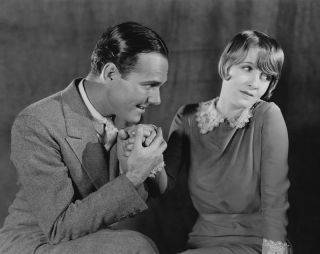 Putting your partner on a pedestal may cause them to pull away, a study in the May 2014 issue of the Journal of Social and Personal Relationships suggests.
(Image: © Everrett Collection, Shutterstock)

Thinking your partner hung the moon may not help your relationship.

New research finds that when people feel put on a pedestal by their romantic partner, their relationship satisfaction suffers. The best-case scenario is a delicate balance, said study researcher Jennifer Tomlinson, a psychologist at Colgate University in New York.

"While it may be tempting to provide effusive praise, I think it's also important to communicate understanding and validation of a person's core identity," Tomlinson told Live Science. [6 Scientific Tips for a Successful Marriage]

Tearing down the pedestal

Earlier work had found that when people think their partner is the bee's knees, they're very happy in their relationship — no surprise, because they think they've found quite a catch. But perceptions of a partner's regard are also very important for relationship satisfaction, Tomlinson said.

She and her colleagues suspected that it might be possible to have too much of a good thing. So they developed three experiments to determine whether there is an optimal level of idealization of a partner.

In the first, 99 couples (all heterosexual, except for one lesbian couple) came to the psychology lab and sat in the same room, filling out what they believed to be identical questionnaires about their relationship.

In half of the cases, the questionnaires were identical. But the other half of the couples were secretly given questionnaires with two different questions. In one, participants were asked to list all of the "extremely valuable and positive" qualities of their partners, and told to limit it to just one if that was all they could think of. Meanwhile, their partners got a question asking them to list 30 objects in their bedroom.

The persons asked to list objects would immediately start scribbling away, creating the impression that they could barely contain what their partners believed to be effusive praise for them.

Afterward, the researchers had the partners sit on a couch with a striped blanket over it. They surreptitiously counted the stripes between the two, which allowed them to measure how far apart the two sat. They found that those who believed their partner had over-idealized them put more space between the two of them, an average of 8.44 centimeters more than the partners who'd gotten the same surveys.

Next, the researchers recruited 89 married couples, with an average age in the mid-30s, as well as 153 college students who were in relationships. The participants filled out surveys expressing how they felt about themselves and how they believed their partners felt about them.

The results revealed that, up to a point, it's a good thing to think your partner idealizes you. People were happiest with their relationship when they believed that their partner saw them as slightly better than they saw themselves, Tomlinson and her colleagues report in the May issue of the Journal of Social and Personal Relationships.

But after that sweet spot, more fawning is not a good thing. To find out why satisfaction dropped with a greater perception of idealization, the researchers tested a few variables. They found that people who see themselves as over-idealized by their partners experience a threat to their sense of self. They feel that their partner doesn't know them, and that he or she has expectations they can't or don't want to meet, Tomlinson said.

People who feel over-idealized are also less likely to make accommodations for their relationships, the results showed.

"People who are feeling over-idealized may feel like they have more power in the relationship, so they may be less willing to put their partner first," Tomlinson said.