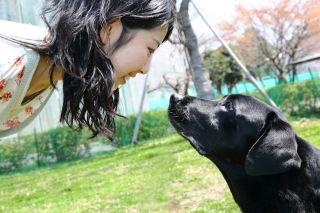 A new study suggest that when dogs and owners gaze into each others' eyes, it facilitates the release of oxytocin, the love hormone, in both species. The new results suggest that early in domestication, dogs may have hijacked an ancient mechanism humans use for bonding.
(Image: © Mikako Mikura)

When people call their dogs their "fur babies," they may be onto something, at least on a chemical level.

Dogs that make so-called puppy eyes at their owners get a spike in the "love hormone" oxytocin — and their owners do too, according to a new study. This same positive feedback in oxytocin release occurs when a mom gazes at her newborn infant, studies have shown.

Because dogs don't otherwise use eye contact as a way to cement bonds with other dogs, the study researchers suggest that man's best friend may have gotten its prized place in human hearts by tapping into an ancient human bonding pathway.

"We humans use eye gaze for affiliative communications, and are very much sensitive to eye contact," study co-author Takefumi Kikusui, a professor of veterinary medicine at the Companion Animal Research Lab at Azabu University in Japan, said in an email. "Therefore, the dogs who can use eye gaze to the owner efficiently would have more benefits from humans." [11 Interesting Effects of Oxytocin]

Oxytocin, often called the "love hormone," performs various actions in humans, such as triggering the onset of labor, reducing stress and helping group members recognize individual members. But in all mammals, one of its key roles is to help a parent and infant bond. For instance, when rodent pups are separated from their moms, they emit a series of ultrasonic noises that spur moms to release more oxytocin and to scoop up their pups and behave in a more nurturing way. This, in turn, leads to the release of more oxytocin and, as a result, more attachment behavior in pups.

In humans, both moms and babies get a spike in oxytocin during breast-feeding, and they will spend hours gazing at each other, each fueling the release of oxytocin in the other, various studies have suggested. For domesticated dogs and wolves, however, eye contact isn't normally a bonding behavior. Rather, dominant dogs stare down canines lower in the group's hierarchy, and pups that are nervous will look away, said Evan MacLean, an evolutionary anthropologist at Duke University who was not involved in the new study.

Kikusui and his colleagues wondered exactly what dogs are getting out of their affectionate gazing at humans. In the new study, which is detailed today (April 16) in the journal Science, the team measured the oxytocin levels of dogs and their owners before and after the pairs spent 30 minutes together. After the owners spent quality time gazing into their dogs' eyes, petting and talking to the furballs, both the people and dogs showed increases in the levels of oxytocin in their urine. What's more, the more oxytocin rose in humans, the more it did in dogs as well.

In similar experiments with wolves, the researchers found no such interspecies-oxytocin loop — even though the wolves were interacting with people who had raised them from pups.

In a second experiment, the researchers spritzed an oxytocin nasal spray into dogs' nostrils and found that female dogs stared longer at their owners afterward, and that both the pups and the humans showed a rise in oxytocin as a result.

The findings suggest that the oxytocin feedback loop can cross species boundaries, at least between man and his best friend. [Like Dog, Like Owner: What Breeds Say About Personality]

The findings may help explain one of the most puzzling stories in human history: how a predatory, fearsome wolf transformed into man's best friend. Kikusui speculated that, at some point early in the domestication of dogs, a small group of naturally more friendly dogs may have gazed at their human counterparts for bonding. In doing so, the dogs unwittingly tapped into the natural human system designed for parent-child bonding.

Humans and dogs may have co-evolved this ability in order for love to flourish across species, Kikusui speculated. In follow-up research, they hope to identify the genes involved, in both humans and dogs.

MacLean, however, doesn't think humans necessarily needed to undergo genetic changes to get an oxytocin boost when they lock eyes with their canine companions.

"Originally, this kind of bonding mechanism was very important between mother and infant, and then we've probably already recycled those same mechanisms in our relationships with other individuals," MacLean said. Therefore, the human ability to bond via eye contact is already very flexible and easily repurposed, he added.