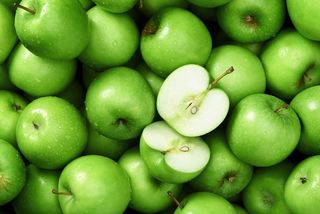 It can be difficult just by looking at apples to know when they've reached their ripest point, and it's wasteful (not to mention disappointing) when you leave an apple out for so long that it becomes too mushy to eat. But now, technology may have a solution.

Scientists at MIT have developed a handheld device that can evaluate how ripe an apple is by measuring the glow of chlorophyll in the fruit's skin under ultraviolet light.

Such a gadget could make a big difference for apple distributors, who sometimes have to guess when deciding where to send their stock. Apples in grocery stores are available year-round, but they only grow in certain seasons, and so shipping has to be carefully coordinated. The ripest apples should ideally go to places where they are likely to sell out quickly, but that doesn't always happen, according to the scientists. [10 Technologies That Will Transform Your Life]

"There's a tremendous amount of wastage," said Anshuman Das, a postdoctoral researcher in MIT's Media Lab and lead author of a new paper describing the invention. Testing ripeness could also help farmers decide the best time to harvest their crops.

One solution could be to analyze apples using a spectrometer, which measures the brightness of light at specific wavelengths. But, current spectrometers tend to be big and expensive, tabletop-size devices, Das said, which makes them not practical for most apple sellers and farmers.

As Das' work is partly funded by the Tata Center for Technology and Design, which focuses on building for communities that don't have access to a lot of capital for technology, he turned to open-source technologies.

Using entirely off-the-shelf parts, Das and his colleagues built a spectrometer that employs ultraviolet light to make the chlorophyll in the skin of an apple fluoresce. The riper an apple is, the dimmer the glow from the chlorophyll, the researchers said. (Chlorophyll breaks down into other chemicals over time.)

When the spectrometer picks up the light from the apple, it sends the data to an Android phone app via Bluetooth that compares it to a previous database of what an apple should be like at given stages of ripeness. The user can then see how many days the apple has been ripening from a baseline amount. So, for example, the spectrometer can say an apple has been ripening for 10 days, and that means that a batch of 10-day-old apples should be shipped out before the 3-day-old ones do, and ideally, they should be sent to stores nearby. [6 Easy Ways to Eat More Fruits and Vegetables]

Das and his team made the spectrometer from parts that are commercially available, with the exception of the chip that picks up the fluorescence, which the researchers specially ordered. As such, the total cost of the device is low, and the computing power comes from an Arduino-based controller — a small do-it-yourself kit run by software and hardware that works with a variety of platforms.

"We wanted this to be largely open-source," Das told Live Science. All the spectrometer's hardware fits in a casing that is just under 3.5 inches (9 centimeters) long and 1.5 inches (4 cm) wide. The whole kit (including the smartphone) can be put together for under $250, according to the study.

The spectrometer was tested on three kinds of apples — Red Delicious, McIntosh and Empire — over a period of 11 days. To check that the spectrometer was accurately measuring chlorophyll, the team compared the device to a commercial spectrometer, and to get an idea of how ripe the apples were, they tested the fruit's firmness.

"There's a device called a penetrometer," Das said. "It measures the resistance of the pulp to a probe. You push this thing into the pulp and if the fruit is more ripe, it's easier to go in." He added that the team chose the apple varieties they did because there is a lot of existing literature about how they ripen.

While it was a bit harder to study the redder apples because the glow from the chlorophyll is harder to see, the spectrometer still performed well enough to use, the researchers said.

Beyond testing for apple ripeness, Das sees a future where this technology could help with other vegetables and fruits. He noted that some, such as broccoli, actually have much more chlorophyll in them and would therefore be even easier to measure.

Then there's data. "We can use this to get tons of data," Das said.  "We might bump into something even more interesting, because the amount of data we'll have is very rich."

The new study was published online today (Sept. 8) in the journal Scientific Reports.