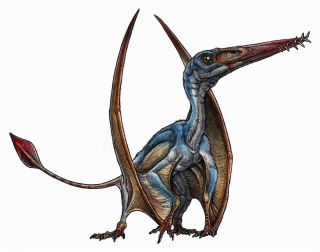 A new species of pterosaur named for its "ancient brain" has been found in Patagonia.

The flying reptile lived in the early Jurassic period, between about 199.6 million years ago and 175.6 million years ago. Paleontologists found the new fossil in north central Chubut province in Argentina. To their delight, the fossil included an intact braincase, offering them a new look at pterosaur neuroanatomy.

The researchers named the new species Allkaruen koi. All means "brain," and karuen means "ancient," in Tehuelche, a language indigenous to Patagonia. [Photos of Pterosaurs: Flight in the Age of Dinosaurs]

"Allkaruen, from the middle lower Jurassic limit, shows an intermediate state in the brain evolution of pterosaurs and their adaptations to the aerial environment," study researcher Diego Pol, a paleontologist at the Museo Paleontológico Egidio Feruglio in Argentina, said in a statement. "As a result, this research makes an important contribution to the understanding of the evolution of all of pterosaurs."

The new pterosaur was found in a bone bed that contains many pterosaur remains. Archaeologists uncovered a vertebra, jaws and a braincase. The braincase was only a few dozen millimeters long, indicating that it was from a small pterosaur species, the researchers said.

It's rare to find an intact pterosaur braincase, according to the researchers, and little has been known about the way pterosaur skulls (and thus brains) evolved over time. The researchers used computed-tomography scans to build digital models of the reptile's inner ear and the interior of its skull.

This technique, in turn, let the scientists put Allkaruen in its place in the pterosaur family tree. For instance, the researchers learned that some skull features associated with Pterodactylus — one genus of pterosaurs — had evolved by the early to middle Jurassic, even though pterodactyls themselves had not yet evolved.The research appears today (Aug. 30) in the open-access journal PeerJ.

Pterosaurs had a suite of adaptations that made them strong fliers. Their bones were feather-light, and they sported air sacs extending from their lungs to keep their body density down and their air exchange efficient, a 2009 study found. While some pterosaur species were tiny, others grew to be the size of giraffes. These behemoths may have used their limbs to leapfrog into flight, paleontologists say.

In 2015, researchers reported the discovery of a 200-million-year-old pterosaur in Utah that had a wingspan measuring 4.5 feet (1.4 meters) long, and 110 teeth, including four that were 1 inch (2.5 centimeters) long.