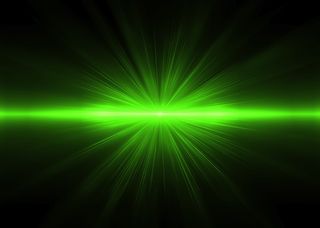 Fluorescent proteins from jellyfish that were grown in bacteria have been used to create a laser for the first time, according to a new study.

Traditional polariton lasers using inorganic semiconductors need to be cooled to incredibly low temperatures. More recent designs based on organic electronics materials, like those used in organic light-emitting diode (OLED) displays, operate at room temperature but need to be powered by picosecond (one-trillionth of a second) pulses of light. [Science Fact or Fiction? The Plausibility of 10 Sci-Fi Concepts]

By repurposing the fluorescent proteins that have revolutionized biomedical imaging, and by allowing scientists to monitor processes inside cells, the team created a polariton laser that operates at room temperature powered by nanosecond pulses — just billionths of a second.

"Picosecond pulses of a suitable energy are about a thousandfold more difficult to make than nanosecond pulses, so it really simplifies making these polariton lasers quite significantly," said Malte Gather, a professor in the School of Physics and Astronomy at the University of St. Andrews in Scotland and one of the laser's inventors.

Gather told Live Science that fluorescent proteins have been used as a marker in living cells or living tissue before, but now the researchers have started using them as a material. "This work shows for the first time that their molecular structure is actually favorable for operation at high brightness — as required, for example, for turning them into lasers," he said.

Gather and colleagues from the University of Würzburg and Dresden University of Technology, both in Germany, genetically engineered E. coli bacteria to produce enhanced green fluorescent protein (eGFP).

The researchers filled optical microcavities with this protein before subjecting them to "optical pumping," where nanosecond flashes of light are used to bring the system up to the required energy to create laser light.

Importantly, after reaching the threshold for polariton lasing, pumping more energy into the device resulted in conventional lasing. This helps confirm the first emission was due to polariton lasing, Gather said, which is something other approaches using organic materials have been unable to demonstrate so far.

Conventional lasers create their intense beams by taking advantage of the fact that photons can be amplified by excited atoms in the laser's so-called "gain medium." This is typically made from inorganic materials, such as glasses, crystals or gallium-based semiconductors.

Polariton laser light is nearly indistinguishable from conventional laser light, but the physical process that creates it relies on a quantum phenomenon to amplify the light.

Repeated absorption and re-emission of photons by atoms or molecules in the gain medium gives rise to quasiparticles called polaritons. In certain conditions — before the energy level required for conventional lasing is reached — the polaritons synchronize into a joint quantum state called a condensate, which gives off laser light.

Conventional lasers require more than half of the atoms in the gain medium to enter an excited state before laser light is produced. This is not the case in polariton lasers, which means, in theory, they require less energy to be pumped into the system, the researchers said.

According to Gather, one of the key advantages of the new approach is that the light-emitting part of the protein molecules is protected within a nanometer-scale cylindrical shell, which prevents them from interfering with each other.

This overcomes a major problem that has plagued previous designs, said Stéphane Kéna-Cohen, an assistant professor in the Department of Engineering Physics at Polytechnique Montréal in Canada, who has worked on organic polariton lasers but was not involved with the new study.

"This allows the laser to operate with much longer pump pulses, which are easier to generate and allows for simpler implementations," Kéna-Cohen told Live Science. "At the moment, many challenges remain for such lasers to be useful because the [excitation] threshold is so high, but they are a fascinating platform for studying physics that normally occur only at ultralow temperatures."

Gather said the fundamental physics suggests design improvements should eventually allow polariton lasers with considerably lower thresholds than conventional ones, which would allow them to be much more efficient and compact.

This makes the new study promising for the field of optical computing, he said, and a tiny laser based on biomaterials could also potentially be implanted in the human body for medical applications. In the meantime, he added that they are a useful model for investigating fundamental questions in quantum physics.

The results of the new study were published online today (Aug. 19) in the journal Science Advances.