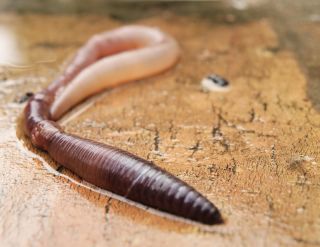 Worms are useful in the garden and great for fish bait, but one of their talents has remained hidden — until now. Scientists have discovered that worms can manufacture  tiny semiconductors.

At King's College in London, researchers fed an ordinary red worm, Lumbricus rubellus, soil laced with metals. The worm produced quantum dots, nano-sized semiconductors that are used in imaging, LED technologies and solar cells. The experiment was published in the Dec. 23 issue of the journal Nature Nanotechnology.

The worms created these electronic components because of their ability to detoxify their body tissue. When worms ingest the metals, proteins in their body shuttle these "toxins" to tissues called chloragogen cells that are similar to a liver in mammals. In the case of cadmium, a molecule called metallothionein attaches to it to take it away. Through several chemical steps the worm separates the metals from the organic molecules they are attached to and stores them in tiny cavities its body, but not forever: eventually whatever toxic metals the worm eats are excreted.

In the experiment the scientists spiked soil with cadmium chloride and sodium tellurite (sodium, telluride and oxygen). The ability of worms to process cadmium is well known, but it wasn't clear what they would do with the tellurium in the sodium tellurite.

The worms ended up making tiny particles of cadmium telluride, a crystalline compound that is also a semiconductor. Those tiny particles — called quantum dots — were then taken out of the worms' tissue. The dots themselves are only nanometers across. [Twisted Physics: 7 Mind-Bending Findings]

In biological imaging, quantum dots are used in place of dyes because they can be "tuned" to glow at specific wavelengths. Cadmium telluride dots, for example, glow green when hit with blue light. The researchers tested the dots on animal cells and found they worked as well as the ones created in laboratories.

The success doesn't mean that thousands of worms are to be sacrificed for dot-making, said co-author Mark Green, a reader in nanotechnology at King's College.

"The interesting bit is that semiconductor quantum dots, which emit light, were made in a living animal," he told Livescience via email. "The aim of the work wasn’t to come up with a new synthetic process of making dots that are better than bench-synthesized materials, it was just to see if we could do solid-state chemistry in a living animal — and it appears we can!"

Green said the idea occurred to him several years back when he was an Oxford University post-doctoral researcher. He heard a lecturer note that animals use certain proteins to get rid of toxic metals such as cadmium. Green realized he was doing something similar to make cadmium telluride quantum dots in the lab, sans worms.

He wondered if some extra chemical might spur worms to make their own cadmium telluride quantum dots.

"The big problem," he said, "was that I didn't know enough biology, and I could see immediately that trying to get the dots out of an animal would be a problem."

So Green shelved the idea for a few years, until he met Stephen Stürzenbaum, the lead author of the paper. Stürzenbaum told Green that he knew exactly where cadmium given to worms went: to the detoxifying chloragogen cells. Since the cadmium — and thus the nanoscale dots — would end up there, it would be relatively easy to get them out of the worm.

So they tried it. It worked.

"We were very surprised, didn't really expect it to work that easily," Green said.

The quantum dots Green and his team made aren't quite the quality of the lab-bench versions. That may change, though. "We'd like to think we can play around with some of the chemistry and make them better," Green said.