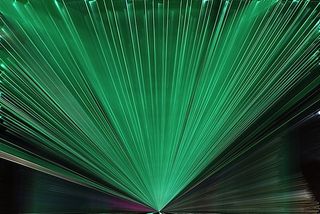 Everyone's heard of disposable razors, but what about disposable lasers? Using inkjet printers, scientists have made laser devices cheap enough to be thrown out after a single use.

Lasers create their high-energy beams using a so-called gain medium, which takes advantage of the interactions between the electrons of its atoms and incoming photons to amplify light to high intensities. Typically, the gain medium is made from inorganic materials such as glasses, crystals or gallium-based semiconductors, but in recent years, researchers have investigated using organic carbon-based dyes instead.

Organic lasers hold great promise because they are low-cost and can emit light in a wide range of wavelengths, but they are limited because the dyes degrade rapidly. [Science Fact or Fiction? The Plausibility of 10 Sci-Fi Concepts]

Now, researchers from France and Hungary have used inkjet printers to produce the organic laser chips at the heart of these devices for mere cents, making it cost-effective to regularly replace the degraded parts.

"I think that this is an exciting piece of work with great potential for applications," said organic laser expert Graham Turnbull, a professor in the School of Physics and Astronomy at the University of St Andrews in Scotland. "The lasers could have future applications as disposable light sources for chemical analysis such as medical screening or pollution monitoring," Turnbull, who was not involved in the new study, told Live Science.

In a paper published today (May 3) in the Journal of Applied Physics, the researchers said the key to their approach's low cost is its efficiency. The most popular method for creating organic laser chips in the past has been spin coating. In this process, the surface on which the dye solution is to be deposited is spun rapidly so that centrifugal force spreads the liquid evenly to form a uniform thin film.

But with typical spin-coating techniques, the vast majority of the dye solution spins off the surface and thus is wasted; as little as 2 percent is actually deposited usefully, the researchers said. In contrast, inkjet printers can accurately squirt small jets of fluid onto the underlying material, they added.

"You print 'where you want, when you want,' without wasting raw materials," study lead researcher Sébastien Sanaur, an associate professor of microelectronics at the Ecole Nationale Supérieure des Mines de Saint-Étienne in France, said in a statement.

For the laser dyes to be printed, they first needed to be mixed with an ink. Although the researchers experimented with inks specifically designed for optical applications, they eventually settled on a commercial variety called EMD6415 that exhibited excellent printing and optical properties.

Then, the solution was printed onto a slide made of quartz in 0.08-square-inch (50 square millimeter) pixels to make the laser chip. The chip was placed between two mirrors that reflected light back and forth through the gain medium during amplification. Another laser, known as the pump, was used to provide the light energy input, the researchers said.

Importantly, the scientists said the laser chip can be switched out easily when it deteriorates. They also demonstrated that they could use two different dyes to produce laser emissions ranging in color from yellow to deep red.

"The major advance here is the perfection of the inkjet printing process for the fabrication of organic 'gain' chips," said Stéphane Kéna-Cohen, an assistant professor in the Department of Engineering Physics at Polytechnique Montréal in Canada. "When used in a laser cavity, these can be used to fabricate broadly tunable lasers, and several dyes exist that together can span the entire visible spectrum," Kéna-Cohen, who was not involved with the new study, told Live Science.

Both Kéna-Cohen and Turnbull said one of the most promising aspects of the research is the possibility of printing several dyes onto the same chip to generate a spectrum of colors with the same device.

"The major obstacle, however, is that these organic lasers still need to be pumped by an external, relatively high-energy laser," Kéna-Cohen said. "Finding a way to pump these electrically or with a low-cost LED would be a major breakthrough for many practical purposes."