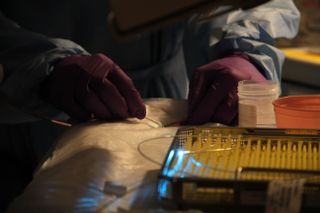 Lasers can now detect problem spots on the intestines of patients with bowel diseases, researchers say.

These devices could reduce the need for patients to undergo painful biopsies that remove tissue samples from their intestines, scientists added.

Nearly 1.5 million Americans have inflammatory bowel disease (IBD), a group of inflammatory conditions of the colon and small intestine. Treating patients who have these problems costs about $1.2 billion each year in the United States, according to the Crohn's & Colitis Foundation of America.

To help keep this condition in check, most patients undergo colonoscopies on a regular basis, which can be expensive. Each colonoscopy can involve several painful biopsies as doctors try and determine whether tissue is indeed abnormal.

"When you remove tissue during a biopsy, you have no clue whether the spot you are probing is really relevant for analysis, so you might have to go back and do it again," said researcher Dr. Razvan Arsenescu, medical director of the Inflammatory Bowel Disease Clinic at Ohio State University's Wexner Medical Center. "I was frustrated many times having to do random biopsies — it was like trying to find a needle in a haystack."

"This technique helps us avoid unnecessary procedures that increase risk to the patients, and really gain an understanding of what's going on in patients in real time," Arsenescu told LiveScience.

Patients receive injections of a dye that quickly circulates within their body. A tiny blue laser at the end of an endoscope — a camera attached to a cable — is then pressed against the side of their intestines.

"Normally, you can't see inside tissues with endoscopy," Arsenescu said. "But the dye responds to the laser, and allows us to take an image."

The laser shines into the tissue, to a depth of about 50 microns, or half the average width of a human hair.

"We can get an image that will allow us to observe individual cells, structures in the tissue and blood vessels," Arsenescu said. "That's about 1,000 times better compared to what you can see with the naked eye."

With this probe, the researchers can then look at tens or hundreds of spots, identify spots that are abnormal, and then do biopsies there.

"We're discovering precancerous lesions with this technique that may have developed into colon cancer and would have been missed by random biopsies," Arsenescu said. "It's making a huge difference for patients."

This laser technique is not meant to replace biopsies, Arsenescu cautioned.

"This is a method meant to be done alongside biopsies, to help make them smarter," Arsenescu said.

Currently, only two dozen or so centers use this technique in the United States, Arsenescu estimated. Ohio State University's Wexner Medical Center is one of the first U.S. hospitals using this type of laser technique to treat patients with IBD — nearly 100 patients have received this treatment since October.

Eventually, this laser technique may be used to detect abnormal tissues in patients with lung, bladder or gynecologic diseases.

"We're right at the beginning with this," Arsenescu said.