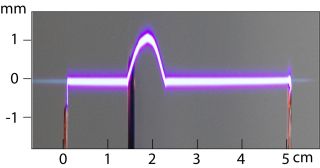 Want to make lightning bend like the supervillain Ivan Vanko in "Iron Man 2?" Vanko needed super-powered whips. In real life lasers might be the way to do it. Turns out, laser beams can control the shape and direction of electrical discharges, physicists have found.

The electric feat, while it may not deliver superpowers, could offer a way to arc-weld at the microscopic scale, build an electron microscope that can see around corners, or even jam electronics, the researchers said.

A team, led by Matteo Clerici, who was at Quebec's National Institute of Scientific Research (INRS) at the time, showed that a laser beam fired in a certain way could shape an electrical spark as it jumped between two electrodes, taking on different shapes, and even bending around an object that is in the way. The effect happens because lasers can ionize air and create a path for electrical discharges. [Science Fact or Fiction? The Plausibility of 10 Sci-Fi Concepts]

To do this, Clerici, now a postdoctoral physics researcher at Heriot-Watt University in Scotland, and colleagues fired a laser at the air between two electrodes that were placed 5 centimeters (1.9 inches) apart.

The laser was fired rapidly, with each burst lasting only 50 femtoseconds. (A femtosecond is a millionth of a billionth of a second, just long enough for a light wave to travel the length of a medium-size virus.) Such rapid pulses mean that lots of energy is delivered in a very short time.

The physicists placed a lens in front of the laser to change the focus of the beam. A typical convex lens, for example, would make the laser beam come to a point at some distance in front of it. That change in focus means the beam actually changes shape.

"There are laser beams where the intense piece propagates on a curved trajectory," Clerici told Live Science. Such a beam is called an Airy beam, after the mathematician George Biddel Airy, who described why rainbows look curved. The lens that makes the Airy beam is shaped to do that to a laser — make the focused region of the beam into a curved shape. "It's essentially a badly designed lens," Clerici said.

They fired the laser separately through different types of lens. Meanwhile they ran a current through the electrodes.

When the laser hit the air molecules it excited the electrons in the atoms, ionizing them, or causing the atom's positively charged particles and negatively charged ones (electrons) to separate. The electrons don't like to stay "free" for long though, so they recombine with the atoms, generating heat. That makes the air less dense because any time you heat a gas it expands. Less dense air has less electrical resistance, so current can travel more easily through it.

In this case, when the current went through the electrodes it generated a spark that jumped the gap between the two electrodes.

With an ordinary lens in front of the laser beam, that spark took on a jagged shape. The less dense and ionized air isn't confined to a small space, and it's turbulent, so the path of least resistance for the current meanders in a zigzag pattern.

Then Clerici and his team changed the lens to one that generates the Airy beam. Since the laser focus in one case was a curved line, the spark followed that path. They could even get the spark to jump around obstacles. In another experimental run they used a lens with a focus that was an S-shaped curve. A third type of lens could generate straight lines.

Clerici said getting a spark to go where you want it can make welding on a small scale much more precise — currently arc-welding small components is a difficult process because the spark generator has to be really close to the object surface to get precise welds. Another application might be electron microscopes. An electron microscope works by lighting up a sample with a beam of electrons. Such beams can only go in straight lines, but this technique might be a way to control their direction more precisely. That means some samples don't need to be taken apart to see their insides.

"We're looking at an electron microscope that can see around corners," Clerici said.

The study is detailed in the June 19 issue of the journal Science Advances.