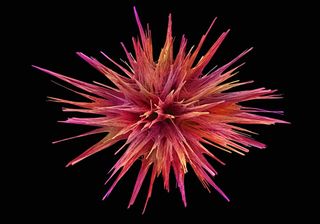 Ever since Robert Hooke first made his beautiful sketches of magnified insects, scientists have been peering at the world through microscopes.

The microscopic world generally refers to things humans can't see with the naked eye. But thanks to microscopes, scientists have the tools to visualize the detailed structures and dynamic processes inside living cells. Today's microscopes can reveal everything from the secretion of insulin in pancreatic cells to the chemical crossfire in slices of living brain tissue.

The Dutch glasses maker Hans Jansen and his son Zacharias invented the first compound microscope in 1595, according to letters by the Dutch envoy to the court of France. The microscope consisted of a tube with a lens at either end, in which changing the distance between the lenses changed the magnification.

Hooke used a compound microscope to create the famous sketches in his tome "Micrographia," published in 1665. Dutch draper and microscope maker Antonie van Leeuwenhoek was also instrumental, being the first to describe sperm cells and bacteria in droplets of water. [Nature Under Glass: Gallery of Victorian Microscope Slides]

But modern microscopes have come a long way since the days of Hooke and van Leeuwenhoek. "Nobody's looking with their eye anymore — everything's digital," said biophysicist David Piston of Vanderbilt University in Nashville, Tenn.

The main advance in microscopy has been in the cameras, Piston told LiveScience. The electronic light sensors in cameras, CCDs, are much more sensitive than the human eye. The consumer camera market has driven the price of a good microscope camera down from about $100 thousand to $30 thousand, Piston said.

Within optical microscopes, there are wide-field microscopes and confocal microscopes. Wide-field scopes include your basic light microscope, which has a lens or lenses to magnify visible light transmitted or reflected by a sample. They're good for looking at single layers of cells or thin tissues, Piston said.

The main advantage of optical microscopes is their ability to image living cells. But they are limited to a resolution of about 200 nanometers, where one nanometer is a billionth of a meter; for comparison, a sheet of paper is 100,000 nanometers thick.

Scanning probe microscopes use a physical probe to scan a sample and produce an image. These scopes enable scientists to view things on the atomic level or smaller.

The uses of microscopes span from the mundane to the arcane. A typical use for wide-field microscopy might be observing how a protein called a transcription factor binds to part of a cell's DNA to activate a specific gene. Improper binding of transcription factors plays a role in many cancers, for example.

Neuroscientists often use confocal microscopy to visualize activities at the synapses between neurons. They can even look at living slices of an animal's brain, Piston said.

Electron microscopes provide a stunning level of detail that reveals fine structures. Scientists have used these microscopes to create the iconic close-up images of red blood cells or human hairs.

But ultimately, microscopy's importance lies in the dynamics of living cells, Piston said. "The ability to look at how things move around will really revolution how we think about cells."