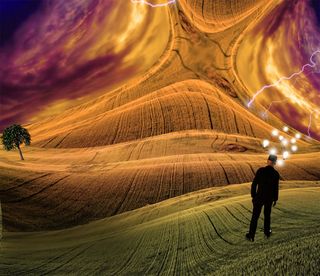 Teleportation and Other Fantastic Claims

The idea of people with superpowers is one that has long captivated audiences. Modern-day movies, graphic novels, TV shows and video games are full of fictional stories involving people who have acquired extraordinary and seemingly impossible abilities. The real world has plenty of fantastic claims as well spurring on debate and study.

One person who made fantastic claims was Pedro Ruiz Calderón, a Catholic priest who was brought to trial in Mexico City in 1540. Calderón claimed that he could teleport between continents, make himself invisible, predict the future, make women fall in love with him, find buried treasure, summon and exorcise demons among other abilities. Research by John Chuchiak IV, a professor at Missouri State University, sheds light on his trial.

LiveScience takes a look at superpowers throughout history. Some of them appear impossible while scientists are working on others to make them a reality.

Psychokinesis (PK) is the ability to move or otherwise manipulate objects using the human mind. There are two types of psychokinesis, the "macro" and "micro" level. Many have claimed macro abilities — to be able to manipulate of large objects — throughout history. A 19th-century example was Eusapia Palladino who, in an 1892 photograph taken in Milan, and shown here, supposedly levitated a table while researcher Alexandr Aksakov checked for fraud.

The micro level involves the manipulation of random events using the human mind. Between 1979 and 2007 the PEAR (Princeton Engineering Anomalies Research) lab in New Jersey studied this phenomenon running detailed statistical analysis. Its researchers found that the human mind has a very slight ability to manipulate random events, a finding that is controversial and debated among scientists.

Time Travel is an ability which is often featured in science fiction. Through time dilation it is theoretically possible to travel forward in time although the effect wouldn't be significant unless you traveled a vast distance on a very fast spacecraft.

Moving backwards in time is more difficult and scientists are still uncertain as to whether it is even theoretically possible.

There have been claims of people having encounters, of sorts, with the past. On August 4, 1951 two English women on holiday near Dieppe claimed to hear the sounds of the famous World War II battle throughout the night while in their hotel room. They took careful notes and an article describing their case was published in the May-June 1952 edition of the Journal of the Society for Psychical Research.

Reincarnation is the belief that when someone dies they are reborn. It's featured in several religions including Hinduism, Jainism and Buddhism.

There have been cases where young children recall information which some believe to be from past lives they lived. The late Dr. Ian Stevenson, a medical doctor who was head of the Division of Perceptual Studies at the University of Virginia, documented and published an estimated 3,000 cases of this over a period of 40 years. He tried to match up these claimed experiences with people who actually died.

Extra Sensory Perception, or ESP, is the ability to obtain information through means other than the five senses. Examples of it include telepathy or “mind reading,” as it’s more popularly known. Precognition is another form and involves knowing of a future event ahead of time. Another form is remote viewing, seeing a distant place through paranormal means.

The U.S. military and CIA did research exploring the military and intelligence applications of ESP, particularly remote viewing. Project "Stargate" was a $20-million study started during the Cold War. It was spurred on by reports that the Soviet Union was investigating ESP. Although some claim that there were successful instances of remote viewing the project was shut down in 1995. [The 10 Most Outrageous Military Experiments

The practice of "dowsing" or "divining" often features a person using twigs or a rod to find a water source. It can, however, be used for other things as well. Pedro Ruiz Calderón, the 16th-century priest, claimed to have been able to find buried treasure using supernatural means, and made a good amount of money selling his abilities. Needless to say modern-day scientists are skeptical that dowsing can actually be done.

In many ways predicting the future is not a supernatural power. Economists, climatologists, demographers, all use scientific (or semi-scientific) methods to try to predict the future.

The use of supernatural powers to predict the future, however, has a much longer history. The use of horoscopic astrology, though not based in science, dates back more than 2,000 years and is tailored to the individual.

An ancient astrologer would determine the positions of the planets, sun and moon at the time their client was born. They would then use the information to determine their future.  Researchers reconstructed and published in 2012 the oldest known astrologer's board, found in a cave in Croatia.

In many ways predicting the future is not a supernatural power. Economists, climatologists, demographers, all use scientific (or semi-scientific) methods to try to predict the future.

The use of supernatural powers to predict the future, however, has a much longer history. The use of horoscopic astrology, though not based in science, dates back more than 2,000 years and is tailored to the individual.

An ancient astrologer would determine the positions of the planets, sun and moon at the time their client was born. They would then use the information to determine their future.  Researchers reconstructed and published in 2012 the oldest known astrologer's board, found in a cave in Croatia.

From HG Wells 1897 novel "The Invisible Man" to Harry Potter's invisibility cloak, the ability to make yourself invisible is one that has long fascinated science fiction writers.

Pedro Ruiz Calderón, the Catholic priest put on trial in 1540, claimed to be able to turn invisible. He said that the ability came in handy when he snuck in and out of the bedrooms of his mistresses.

Although the power seems fantastic scientists are working on technologies that may one day be able to render large objects partly or entirely invisible. Using artificial metamaterials they are developing techniques to bend light. Another effort, published in 2011 in the journal Nature Communications, uses calcite to block off red and green lasers and ordinary white light.

The ability to use supernatural abilities to make someone fall in love with you has ancient origins.

Although modern-day scientists don't believe in love spells some substances, like strawberries, are said to act as an aphrodisiac, increasing sexual desire. [Top 10 Aphrodisiacs]

Teleportation was made famous by the series "Star Trek." People, aliens included, could beam from the fictional starship Enterprise to the surface of a planet in one piece (although transporter malfunctions were occasionally used as a plot device).

In real life Pedro Ruiz Calderón, the priest who went on trial in 1540, claimed to be able to teleport from Mexico to Europe and back again. His claim was laughable since, if he could do that, he could have easily escaped his trial!

Today scientists working in the field of quantum physics are working on teleporting light, with some success. Whether we will ever be able to teleport spaceship crewmembers or warlock priests is another matter. [Twisted Physics: 7 Mind-Blowing Findings]