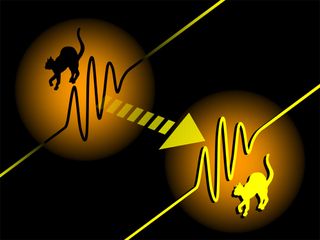 An illustration of the quantum teleportation of 'Schrodinger's Cat' wave packets of light.
(Image: © Science/AAAS)

Our world is getting closer to "Star Trek" every day, it seems. Scientists announced today (April 14) they've been able to teleport special bits of light from one place to another, a la "Beam me up, Scotty."

While the advance doesn't necessarily mean we'll ever be able to teleport people, it does represent some pretty nifty, mind-bending physics.

Teleportation requires taking advantage of a quirk of quantum physics called entanglement. Two particles can be bonded so that even when separated by large distances, they communicate instantly, and what happens to one affects the other. (It's a situation so bizarre Einstein called it "spooky action at a distance.")

To teleport light, researchers led by Noriyuki Lee of the University of Tokyo had to destroy it in one place, and re-create it in another. This mirrors the teleportation process on "Star Trek," where transporters scan a person, atom by atom, and dismantle him, only to rebuild the person by configuring a different set of atoms in exactly the same pattern in another place.

Lee and his team accomplished this by linking a packet of light to one half of a pair of entangled particles. They then destroyed the light and the particle it was linked to, leaving only the lone particle of the entangled pair. The remaining particle retains the link with its entangled partner, though, including information about the light, which enabled the researchers to rebuild the light in the exact configuration at the other location.

The scientists reported their experiment in the April 15 issue of the journal Science.

This actually isn’t the first time physicists have teleported particles or light in this way. What differentiates the new research is that this time they teleported something much more complicated. This teleported light wasn't just any light — it was in a special quantum state called a Schrödinger's-cat state.

Schrödinger's cat is a thought experiment invented by Austrian physicist Erwin Schrödinger in 1935 to describe a truth about quantum mechanics: that some properties of particles are not decided until an outsider forces them to choose by measuring them.

According to the rules of quantum mechanics, the cat is neither dead nor alive until the box is opened and an outside observer "measures" the situation. While the box remains closed, the whole system is suspended in a state of uncertainty where the cat is both dead and alive.

Schrödinger intended the story to sound a bit ridiculous — he was using it to highlight how bizarre the ideas of quantum mechanics would be if extended beyond particles to the macro world of everyday objects.

Nonetheless, the strange situation remains a fundamental part of the theory of quantum mechanics, and experiments verify that particles really do seem to exist in these suspended states of multiple possibilities until forced into one situation or another by measurements.

Just like a cat that is both alive and dead, light can be in a Schrödinger's-cat state by having two opposite phases at the same time. A light wave's phase is akin to whether a jump rope is up or down at a certain position. Not until a direct measurement is taken would this light be forced to choose between these two contradictory conditions.

This light is in a particular quantum-mechanical arrangement that couldn't be described with the classical physics used to understand the larger, macro world, including basic light waves.

"It can't be presented classically — it would be an oscillation both up and down, which makes no sense," said physicist Philippe Grangier of France's Institut d'Optique, who was not involved in the new research, but who wrote an accompanying essay on the finding in the same issue of Science.

Grangier said the experiment was an advancement in physicists' abilities to both make complicated Schrödinger's-cat states in light, and to teleport objects. Yet there's still a long way to go before anything more complicated can be teleported.

"There is not at present a way to teleport even a bacteria," Grangier told LiveScience. "For a real cat I don't think this will be possible in any possible future."

Nonetheless, the new advance could help physicists work toward superfast quantum computers and other applications that come from being able to manipulate things on the quantum scale.

"We are really learning how to manage the quantum world," Grangier said. "And this is a long and painful process, especially for experimentalists like me. All these things, just a few years ago they were just ideas. Now they are turning into experimental realities."