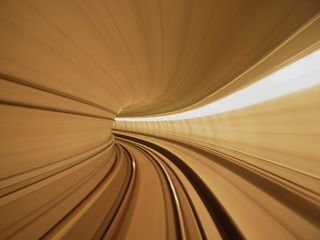 If subatomic particles called neutrinos can go faster than the speed of light, as scientists reported Sept.22, it would require a rethinking of the basics of physics, including the possibility of time travel.
(Image: © Willem Dijkstra, Shutterstock)

If a report of particles traveling faster than the speed of light turns out to be true, it will rock the foundations of modern physics — and perhaps even change the way scientists think about time travel.

But don't fire up the DeLorean just yet. Physicists are skeptical that the tiny subatomic particles, called neutrinos, really are breaking the cosmic rule that nothing goes faster than light. And even if they are, neutrinos don't make the best vessel for sending signals to the past because they pass through ordinary matter almost unaffected, interacting only weakly with the wider world. [Countdown of Bizarre Subatomic Particles]

So you may be able to send neutrinos back in time, but would anyone notice? "If you're trying to get people's attention by bouncing neutrinos off their head, you could wait for quite awhile," Seth Lloyd, a physicist at the Massachusetts Institute of Technology, told LiveScience.

That hasn't stopped physicists from imagining the possibilities in a world where faster-than-light travel is possible. If the neutrino experiment is confirmed, it opens the door to at least sending messages through time using those neutrinos, physicists say. You might even be able to send messages to "past you" with neutrinos, one physicist suggests. Experiencing time backwards, once thought impossible, might be outside the realm of sci-fi, another imagines. Of course, this is all predicated on the finding being true — and it raises thorny questions of how the universe would work if people were able to go back in time and, say, erase their own existence.

The news that European researchers had detected neutrinos traveling faster than light broke yesterday (Sept. 22), triggering both typical scientific skepticism and pure amazement in the physics world. In an experiment that zaps neutrinos from CERN in Geneva to the INFN Gran Sass Laboratory in Italy, scientists clocked the particles outrunning light by 60 nanoseconds over 453.6 miles (730 kilometers) — a neck-and-neck race to be sure. [Infographic: See How Neutrino Experiment Works]

According to Einstein's Theory of Special Relativity, neutrinos shouldn't even be able to match light speed, much less break it. Neutrinos have (very small) mass, and as Einstein posited in his famous E=mc squared equation, mass is equal to energy. As something speeds up, its energy increases, too. Because energy is equivalent to mass, its mass increases. Now you've got a heavier object, so you've got to add even more energy to get it going faster. Before you know it, you need "completely unreasonable" amounts of energy to keep inching your object toward light speed, said Harvard University physicist Gary Feldman.

"You keep accelerating but you just incrementally approach [light speed], so you have to add more and more energy to go faster and faster, but it becomes less and less effective," Feldman told LiveScience.

Some particles have been shown to exceed the speed of light when traveling in a medium rather than a vacuum, but neutrinos pass through the Earth as if it were a vacuum, so they shouldn't ever be able to zip past light speed. The buzz in the physics community is that they probably haven’t.

"Even though the experimenters have done a very careful job and it's a very impressive paper … it was a very complicated analysis and there's always a possibility that there's just an error in what they did," Feldman said.

One possible error could be in the calculations the scientists used to correct for the effect of the atmosphere in their experiment, Lloyd said. Light actually gets a bit bogged down when it isn't in a vacuum, while neutrinos zip through the atmosphere without any effect. It's possible that the CERN researchers miscalculated in correcting for the atmospheric effect and that neutrinos aren't actually going faster, but the light is just going a smidge slower than they realize.

But if the results do hold, "it's major, it's humongous, it's the biggest thing in 100 years," said Michio Kaku, a theoretical physicist at the City University of New York.

"You're talking about a tidal wave hitting physics if it's true," Kaku told LiveScience. "There are two rocks upon which modern physics is based. One is quantum theory and one is relativity. If one of the pillars falls, we're in deep trouble."

What does that mean for time travel? In theory, it might be more possible than scientists had thought. Einstein pointed out that time is relative: As you approach light speed, your experience of time is not the same as it is for the folks chugging along at their usual speed. What feels like a second to you will feel like much longer to them. This idea, called "time dilation," spawned such sci-fi classics as 1968's "Planet of the Apes," in which what feels like 18 months to Charleton Heston and his crew is enough time for gorillas, chimps and orangutans to evolve language and complex societies back on Earth. [Top 10 Scary Sci-Fi Series]

So far, this seems pretty much impossible, not least because some other side effects of faster-than-light travel should include reducing your weight and width to less than nothing, Kaku said. [Watch: Can You Time Travel?]

One way to think of this is like a mirror, Lloyd said. You send a message to the mirror, and it reflects it back, but so quickly that "past you" is the one who receives it.

But all of this is moot if it's only neutrinos that can be coaxed past the speed of light, Lloyd said. Because they don't interact with much, your messages would likely go unnoticed by past generations. An April 13, 1865, warning to Abraham Lincoln not to go into Ford's Theater the next day would pass through the president like a ghost. [Read: 'Time Traveler' Spotted?]

Doing away with Einstein's theory would also complicate causality, the idea that things influence each other in chronological order. When you allow the past, present and future to interact, "that gets all messed up," Lloyd said, and you start to get paradoxes. A classic is the Grandfather Paradox: What if you went back in time and shot your grandfather, preventing your own birth and thus preventing yourself from ever shooting your grandfather?

It's a headache, to say the least. And not all researchers are convinced that the finding, even if true, would ultimately overturn the well-tested, century-old Special Theory of Relativity that keeps things from getting so messy.