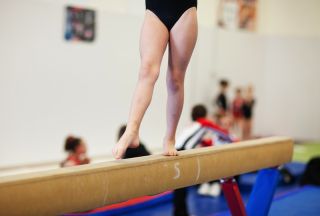 Fans of the Summer Olympics can't seem to get enough of American gymnast Simone Biles. The 19-year-old, who has already snagged gold medals in events for the team, individual all-round and vault competitions, can jump, flip and twist in ways the average person likely never will. Biles may make it look easy, but between all the different events that gymnasts have to master — from balance beam to the vault for women, and the pommel horse to the rings for men — what's the most challenging apparatus, according to science?

The answer is complicated, experts say. Generally, the gymnastic events that have the simplest explanation in terms of physics tend to also be the ones where athletes push the limits of physics the most.

For example, the physics of the pommel horse, an apparatus that male gymnasts must tackle, is easy to understand, said Jonas Contakos, a gymnastics coach with a Ph.D. in kinesiology and a master's in biomechanics. [Exercise and Weight Loss: The Science of Preserving Muscle Mass]

"The principle is quite simple: Keep your center of mass over the base of support at all times," Contakos told Live Science. In action, however, the ways in which gymnasts manipulate this basic principle places it among the most difficult events, he said.

The main challenge of the pommel horse, from a physics point of view, is dynamic stability, which means that the gymnast has to stay balanced enough to remain on the pommel while also moving his body.

"I think their center of mass is actually swinging around as their legs swing around, but they have to do that at the right rates, so, as they start to fall over, their legs are already having moved to the other side," said Jordan Gerton, an associate professor of bioengineering, physics and astronomy, and director of the Center for Science and Mathematics Education at the University of Utah. Basically, gymnasts are trying to keep from falling while making that objective as hard for themselves as possible.

The balance beam involves similar concepts. All the athlete has to do is keep her center of mass over the 4-inch-wide (10 centimeters) beam in order to balance. In other words, she could just stand there and not fall off, but it would be a rather uninteresting physics problem (and sport). Instead, gymnasts spin, twist and kick on the balance beam, testing the boundaries of the simple physics principle that could easily keep them stable. [7 Weird Facts About Balance]

Gerton said that the rings should also be counted as an event that's among the most advanced confrontations with physics that an athlete can face. The physics challenge that he notices specifically in this event is the lack of leverage that occurs when a gymnast pulls his body into a cross shape. It's one thing for a person to pull his body up to and through rings with arms that are near the body, but elite male gymnasts do this with their arms completely straight. The farther away from the body a gymnast holds his arms, the less leverage he has to move his body upward, Gerton said.

"[They] need to have an incredible amount of core strength to counteract that reduction in the leverage," he added.

In reality, there is no gymnastic event that is without extreme physics, experts say. Many of the events involve complicated balancing, such as handstands on the bars, and these maneuvers require the same coordination between center of mass and base of support as do the balance beam and pommel horse, but not as continually. Vault presents its own unique physics problem in the conversion of horizontal energy (running) into the vertical push and velocity required for the aerial skills gymnasts perform off the vault.

"You'll notice that people like Simone Biles do that really efficiently," Gerton said. "She takes her horizontal speed […] and she is able to convert that into vertical motion, which gives her a lot of time to do amazing things in the air."

Taking it to the floor

However, vaulting doesn't require the same level of balance as do some of the other apparatuses.

Tumbling is notable because, when viewed through the lens of physics, it's somewhat the opposite of pommel horse and balance beam: There are fewer constraints on the gymnasts' movements but the physics involved are harder to understand. Gymnasts in this event aren't fighting to balance on a small surface, but the complex physics of a floor routine is sometimes beyond comprehension.

"Tumbling on floor, from a physics perspective, is really, really complicated to deal with if you were to do an analysis of tumbling," Contakos said. In the world of biomechanics, motion analysis on tumbling is still at a really "primitive stage," he said. [The Twisted Physics of 5 Olympic Sports]

Floor exercises are hard to analyze, because they have more variables than the other events, according to Contakos. For example, the floor is spring-loaded and the gymnasts are moving their bodies in more diverse ways that blend jumping, balancing, twisting and turning.

Olympic gymnasts in every event are performing at the limits of what is physically possible and showing laymen and scientists alike that they can do more than anyone realized.

"As soon as we think we've hit a wall on that ability of just one simple principle, someone comes along and does it bigger and better and faster, or makes up a new skill," Contakos said.

And this year's gymnasts at the 2016 Summer Olympics in Rio de Janeiro are no exception.

"These amazing Olympic athletes are pushing the limits all the time," Gerton said. "They're figuring out how to push the physics to the edge as well."