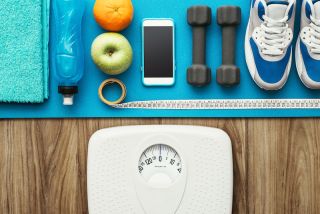 Many people who take up a regular exercise regime do so with the hopes of shedding pounds. But exercising to lose weight can be tricky.

People who are exercising for weight-loss must aim for a Goldilocks diet: One that provides just enough calories to prevent muscle wasting, but not enough to pack on extra pounds or hold on to the ones already there. Exercisers may also need to keep closer track of the ratio of carbohydrates, fat and protein experts said.

People who exercise in order to lose weight should not restrict their calories too dramatically, said Melinda Manore, an exercise scientist at Oregon State University and a former member of the President's Council on Fitness, Sports and Nutrition (PCFSN) Science Board, who has done extensive research on nutrition, metabolism and exercise.

That's one of the most common pitfalls for those working out, said Jordan Moon, an exercise physiologist and sports nutritionist at the United States Sports Academy and Concordia University Chicago, and chief science officer at the fitness tracking website FitTrace.com.

"The worst thing you can do is work out really heavy, tear a bunch of muscle up, and then not eat anything for 12 hours, because [then] you're not going to recover," Moon said.

But the timing of eating can be important in weight loss, the experts said. People who work out to lose weight should keep in mind that any calories they consume right before or during a workout will be burned off first, before their body turns to burning off its fat stores, Moon said. That's because it takes less energy for muscle tissue to take in sugar from a recent meal, which is still floating in the bloodstream, than it does to go through the metabolically intensive process of lipolysis, Moon said. In lipolysis, fat tissue is broken down into fatty acids, which must then be converted to glucose, or blood sugar, before they can be used as energy by muscle cells.

A 30-minute workout burns about 200 calories, about as many calories as contained in a 32-ounce (946 milliliters) bottle of Gatorade, so drinking sugary sports drink or protein shake will counteract any weight-loss benefits of moderate exercise, Moon said.

A weight-loss goal of 1 to 2 lbs. (0.45 to 0.9 kg) per week is realistic, but people who try to lose much more than that may risk losing muscle mass, Manore said. Including a slightly higher proportion of protein in the diet can help reduce muscle loss when people are exercising for weight loss. The Academy of Nutrition and Dietetics, Dietitians of Canada, and the American College of Sports Medicine all recommend people eat between 1.2 to 2 grams (0.04 to 0.07 ounces) of protein per kilogram (2.2 lbs.) of body weight daily to prevent muscle wasting when exercising.

This amount corresponds to about 80 to 120 grams (2.8 to 4.2 ounces) of protein daily for a 150-lb. (68 kg) man, an amount many people already get in their diets, according to a 2015 health survey conducted by the U.S. Department of Health and Human Services.

"Most Americans don't have an issue getting enough protein," Moon said.