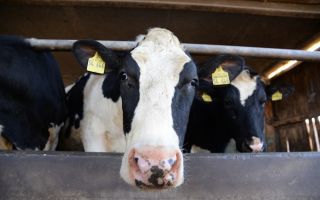 One way to reduce children's rates of asthma may come from dairy farms, a new study finds. And not just any dairy farms — Amish dairy farms, to be exact.

Kids who grow up in Amish communities have much lower rates of asthma than the general population, potentially thanks to their exposure to the communities' dairy farms at an early age, according to the study, published today (Aug. 3) in the New England Journal of Medicine.

Indeed, exposure to an "Amish-like" environment appears to protect kids against asthma, said Carole Ober, a professor of human genetics at the University of Chicago and a co-author of the study. [9 Weirdest Allergies]

In the study, the researchers compared two relatively isolated farming communities: an Amish community in Indiana and a Hutterite community in South Dakota. The researchers wanted to compare these communities because the two groups have many similar cultural traditions, Ober said. For example, both groups shun television, radio and the internet; have large families; and breast-feed their children for a long time, she said. The two groups also eat similar diets, she said. However, there's a striking difference in the rate of asthma, which is much higher in Hutterite kids than in Amish children, she said.

The researchers looked at blood samples from 30 kids from ages 7 and 14 from the Amish community, and 30 kids of the same age range from the Hutterite community. In addition, the researchers collected a small amount of dust from 10 houses in each community.

The researchers also took the house dust that they collected and exposed mice to it. The animals that were exposed to the Amish house dust did not get asthma when they were later exposed to things that would normally trigger the condition, the researchers found. The Hutterite house-dust, on the other hand, did not have a protective effect.

This suggests something in the dust in Amish homes has a protective effect against asthma, Ober told Live Science. Moving forward, the researchers hope to figure out exactly what component of the dust is beneficial, she said. It's likely bacteria or fungi, she added, but it's unclear what types of bacteria or fungi, or what combinations of microbes.

The researchers think that the potentially beneficial bacteria or fungi in Amish house dust can probably be traced back to the Amish dairy farms, Ober said. In these communities, the families live much closer to dairy farms than kids in Hutterite communities do, and Amish children often start going into barns at a very young age, she said. This exposes the kids to animals and the microbes that often accompany them, according to the study. These microbes can make their way into house dust.

In Hutterite communities, on the other hand, the families live much farther from the farms, and kids don't come into contact with animals at a young age, Ober said.

The study illustrates what researchers call the hygiene hypothesis, Ober said. This idea proposes that in the past several decades or so, the environments that people live in have gotten much cleaner, but this cleanliness has had a negative impact on the human immune system, she said. As a result, people are now more susceptible to immune-related diseases such as asthma, she said.

One of the biggest changes related to cleanliness is the switch from farming communities to nonfarming communities, Ober said. Indeed, researchers in Germany have found that being exposed to things you would find on a farm — cows, in particular — may have a protective effect against certain diseases, Ober said. (Other research has shown that if families have a pet dog when their child is born, the child has a lower risk of asthma, she added.) [7 Surprising Benefits of Dog Ownership]

But for kids who don't grow up on dairy farms, the findings may still be relevant, she said.

"I keep saying if everyone would just put a cow in their house, no kid would have asthma, but that's not very practical," Ober said. Instead, Ober said that she envisions an air mister that parents could use in a child's bedroom during their first year of life, that would spray the beneficial microbes into the air.

The age at which kids are exposed to the microbes is important, too, because the benefits seem to only take effect if a child is exposed as an infant, Ober said. In future studies, she would like to encourage Hutterites to get their babies to be around animals very early, and see if this reduces the children's risk of asthma, she said.