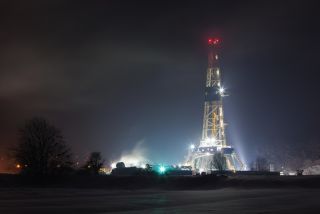 Researchers found that people who lived close to active fracking wells were more likely to develop mild, moderate or severe asthma compared with those who did not live near active sites, according to the study, published today (July 18) in the journal JAMA Internal Medicine.

“Fracking" is a shorthand term often used to refer to an unconventional way of getting natural gas out of the ground. (Technically, fracking is just one step in this four-part process.) In the study, the researchers looked at unconventional natural gas development activity in Pennsylvania, where more than 6,200 wells were drilled between the mid-2000s and 2012. [Facts About Fracking]

The researchers looked at patient data from a regional health clinic and identified more than 35,000 patients with asthma in the area. The patients were grouped based on whether their asthma was categorized as mild (meaning the patient was prescribed medication for asthma), moderate (the patient visited the emergency room because of asthma) or severe (the patient was hospitalized because of asthma). Then, the researchers looked at how close these patients lived to sites with different types of well activity.

There are four steps in this type of natural-gas extraction, and each may be linked to an increased risk of asthma for people living nearby, according to the study. The first step is "well pad preparation," a monthlong process during which an area of land is cleared and equipment is brought in. The second step is drilling, which can also last about a month, according to the researchers. The third step is the "stimulation" of the drilled well — this is the actual fracking — and lasts about a week, according to the study. The technique involves injecting pressurized liquid into the wells to extract the natural gas.

By this point in the process, more than 1,000 truck trips have been made to carry supplies to and from each site, the researchers added. The final step in the process is gas production.

The researchers found that people who lived in areas with more well activity were more likely to develop asthma of all levels of severity than those who lived in areas with low levels of activity. In addition, each stage of the unconventional natural gas development process was linked to an increased risk of asthma as the activity level increased, the researchers found.

However, it's unclear if the associations found in the study are causal, the researchers, led by Sara Rasmussen, an environmental health researcher at Johns Hopkins Bloomberg School of Public Health, wrote in their study. In other words, the researchers do not know if unconventional natural gas development causes asthma.

Dr. John Balmes, a professor of environmental health sciences at the University of California, Berkeley who was not involved in the new study, agreed that the study was not designed to establish a cause-and-effect relationship. The study compared people who live near fracking activity to those who live farther away, at a single point in time. But to establish cause and effect, researchers could follow a single group of people who live in an area where there wasn't previously fracking activity but now there is, over time, he said.

What the study does do is help researchers generate a hypothesis about unconventional natural gas development and asthma, Balmes said. While researchers don't know exactly why fracking and related activities might be linked to asthma, the findings suggests that "we need to learn more," he said. [Asthma: Causes, Symptoms & Treatment]

For example, getting specific measurements about the concentrations of certain air pollutants around wells would be beneficial, Balmes told Live Science. Researchers could look at levels of particulate pollution, such as elemental carbon, which is a marker of diesel exhaust, and nitrogen dioxide, he said.

But the amount of information that the researchers gathered about the different stages of gas development activity was a particular strength of the study, Balmes said. This is an improvement upon previous studies that looked only at the distances that people lived from wells and these people's health, he said.

Although the researchers did not look at the mechanisms linking unconventional natural gas development and asthma, they noted that the activity has been linked to air pollution, particularly from truck traffic, as well as stress, sleep disruption and reduced socioeconomic status for people in the area, all of which have been linked to asthma.

"I would suspect air pollution and stress" play major roles, Balmes said. Scientists know from other studies that the combination of these two factors has a larger effect on asthma than either factor has on its own, he said. Indeed, there's increased research interest right now in how environmental factors and stress are linked to asthma, he added.