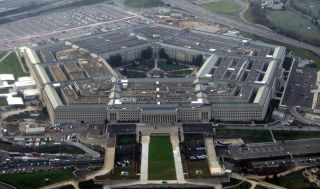 The Pentagon in Arlington, Virginia, is the headquarters for the Department of Defense.
(Image: © Creative Commons Attribution-Share Alike 2.0 Generic)

How did the Pentagon get its name? Well, that's a no-brainer. But how did the Department of Defense's (DoD) giant headquarters get its shape? That's a longer story.

The building was originally designed to fit onto a tract of land with borders on five sides. In the end, it was built elsewhere, at a site where a pentagonal shape was no longer essential. But by the time of this location change, it was too late to come up with a new design. So it remained a pentagon.

"It was basically an accident that was born out . . . [of] war-time emergency," Steve Vogel, a Washington Post reporter and author of "The Pentagon – A History"(Random House, 2007), told Live Science.

In the summer of 1941 in Washington, D.C., there was "a real feeling that [the] U.S. would be drawn into [World War II]," Vogel said. At that time, however, the War Department, the precursor of today's DoD, was spread among many temporary buildings in Washington. [US Government Invites Hackers to 'Hack the Pentagon']

In anticipation of war, Brig. Gen. Brehon Burke Somervell was tasked with expanding the department's headquarters. As Vogel explained, the original thought was to build temporary buildings, but Somervell "pretty much took these instructions and began running with it," and decided that the best solution would be a single building to house the entire department, Vogel said.

Vogel called Somervell "the father of the Pentagon — really the single figure that kind of brought the concept together and then executed it in an amazingly short period of time."

No time to spare

Vogel detailed the Pentagon's origins in an excerpt from his book published by The Washington Post in 2007.

As Vogel explained in his article, on a Thursday in July 1941, Somervell instructed his design team to come up with a plan for a building that could accommodate 40,000 people; include parking for 10,000 cars; and be no more than four stories tall, in order to conserve steel and avoid blocking views of Washington.

The building, slated to have nearly twice the floor area as the Empire State Building, could not be a skyscraper. Nor could it, with its enormous footprint, fit in Washington, D.C. Instead, the team decided to situate it across the Potomac River from D.C. on the site of Arlington Farm, a government-owned experimental agricultural operation east of Arlington National Cemetery.

The tract of land on Arlington Farm that the building designers were considering happened to have borders on five sides. The design team tried a few different layouts, but "eventually, they decided, 'Why don't we try to shape the building to the shape of the land?'" Vogel said. Above all, it was architect George Edwin Bergstrom who championed the five-sided form, Vogel noted.

However, Gilmore D. Clarke, then-chairman of the U.S. Commission of Fine Arts, objected to the proposal, saying that the Pentagon would block the view of Washington from Arlington National Cemetery, where Washington designer Pierre L'Enfant was buried. Would the late architect no longer be able to gaze upon his creation, however metaphorically? If the Pentagon were built on Arlington Farm, the answer would be no, and that, according to Clarke, would be a problem.

Additionally, Frederic A. Delano, then-chairman of the National Capital Park and Planning Commission and also uncle to then-President Franklin Delano Roosevelt, opposed the plan mainly out of concern about the traffic it would create across the Potomac. "People didn't want to have this huge building, whatever shape it was, sitting on that property," Vogel said.

In response to these pressures, Roosevelt wrote a letter to a Senate subcommittee, expressing reservations and asking for the building to be smaller. But Congress didn't listen, and passed the original bill — for the War Department headquarters to be built on the Arlington Farm tract and at its original size — anyway. Disappointed that Congress had not taken his advice, Roosevelt ordered the construction team to put the new building south of Arlington Farm in what was then a somewhat seedy neighborhood called "Hell's Bottom," Vogel wrote in his book. [In Photos: A Museum Honors Teddy Roosevelt]

There, part of the Pentagon’s parking lot would still overlap Arlington Farm, not on the five-sided tract, but an area outside the tract that was also Arlington Farm property, Vogel said. Because the Pentagon property technically overlapped with Arlington Farm, it was still in accordance with the bill Congress had passed.

In the new location, the pentagonal shape was no longer necessary, but the project leaders decided to stick with their design. No longer constrained by the tract of land, the Pentagon could be symmetrical, which, aesthetically, was a plus. And the building's pentagonal shape, originally chosen to fit within Arlington Farm, turned out to have other benefits: The shape created shorter distances for traveling within the building — 30 percent to 50 percent shorter than they would be within a rectangle, architects calculated.

Essentially, it had the geometric benefits of a circle, in terms of shortening within-building distances, but it had straight sides, which meant it was easier to build than a round building would have been, Vogel explained.

That was good, because construction on the building needed to happen very quickly; Somervell had promised to finish the building within a year; according to the DoD's Pentagon Tours site, such a project would normally be expected to take four times as long.

Construction workers broke ground on the building on Sept. 11, 1941. (Exactly 60 years later, it would be the site of one of the most infamous attacks on U.S. soil.) Seven months later, even before the construction was complete, the first employees moved in. The Pentagon was built in a clockwise direction, Vogel said.

"They started moving people into the building sections they finished, and then sort of continued on their way around, continued to drive piling and pour concrete even as they started having thousands of people working in the building," Vogel said.

So, despite its unique shape, construction wasn't pent up by the Pentagon.