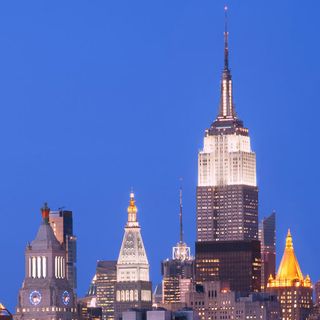 NEW YORK — The Empire State Building's owners once envisioned floating airships docking with the skyscraper's spire, but windy updrafts forced the dirigibles to abandon that dream. Today, the world-famous building may stand for a more practical vision of the future that can save energy without dimming the lights.

Recent renovations have allowed the iconic skyscraper to save on 20 percent of the energy used by its 20,000 workers and 3.5 million annual visitors — total building usage being enough energy in an hour to keep an average light bulb burning for over 100 years. The energy retrofit included elevators that harvest energy with regenerative braking, lights capable of turning on and off by themselves and the largest wireless network of sensors installed in any building in the world.

"Saving energy without compromise in performance is what's going to save the world, and that's the work we set about doing at the Empire State Building," said Anthony Malkin, chief of the Empire State Realty Trust.

In this case, saving the world started with the Empire State Building saving $2.4 million in energy costs in its first full year following the energy retrofit. Eventually, the building is expected to save on $4.4 million in energy costs after tenant spaces have been renovated — enough to pay for the energy retrofit in three years. The building owners marked the first anniversary of the energy efficiency makeover on May 7.

"You're not going to change the world with a water feature or bike rack or a shower or a wall of green plants in your lobby," Malkin told InnovationNewsDaily. "The No. 1 consumer of power in a city like New York City is buildings — in New York City, it's about 80 percent."

New energy-efficient buildings rise all the time, but more than 90 percent of all buildings that will exist in 2035 already stand today. For cities to make a difference in saving energy, more existing buildings will need to follow the example of the Empire State Building — currently the tallest U.S. building to have received a Gold LEED certification for sustainability from the U.S. Green Building Council.

The iconic skyscraper beloved by tourists and Hollywood filmmakers appears mostly unchanged from the time it first soared above the New York City skyline during the Great Depression, but internally, it received its first top-to-bottom renovation (including the energy efficiency efforts) as part of a $550 million effort. The last big change in the building's history was when air conditioners were installed in the 1950s, Malkin said. [Video: Empire State Building Energy Make-Over]

Much of the energy efficiency planning that began in 2006 focused on insulating the 102-story building. Starting in 2009, work crews installed insulation between radiators sitting below each of the windows and the building's outer walls to keep heat from escaping during the colder months.

A mini-factory inside the Empire State Building also allowed work crews to upgrade the building's 6,514 windows at night — all the better for not disturbing office workers during the day. The work crews removed each window to the workshop for cleaning, installed a heat-reflective film between the double panes of glass, and injected krypton and argon gases as added insulation. That left the refurbished windows almost as much energy efficient as triple-paned windows, but for a fraction of the cost.

First, Johnson Controls put in variable controls for the Empire State Building's air conditioner chillers and air ventilation system — the equivalent of allowing for different speed settings to adjust to changing temperature conditions. Then the company hooked everything up with sensors networked together in a huge, intelligent monitoring system.

"Today, the Empire State Building is perhaps the building with the most installed wireless thermal temperature settings and sensors throughout the building compared to any other building that's in place," said Dave Myers, president of the building efficiency business at Johnson Controls. "And part of that is to allow the dynamics to take place around the different operating conditions required to save energy."

That efficiency extends from automated hallway lights to the Empire State Building's outside lighting display. New energy-efficient LED lighting will allow the building to show off new and improved computer-controlled displays for both New Yorkers and tourists during the evenings.

But the Empire State Building owners also wanted to recruit the building's 20,000 workers and resident companies to save energy. Their new system encourages companies to install energy-efficient measures, allows residents to see their energy usage, and even spurs on competition between building tenants by allowing them to see how well their neighbors are doing.

That sharing of energy efficiency data goes beyond encouraging neighborly competition within the skyscraper. The Empire State Building owners worked with Johnson Controls, the Clinton Climate Initiative, Jones Lang LaSalle and the Rocky Mountain Institute to make the entire energy-efficiency retrofit process an open format to inspire other buildings. [10 Building Materials from the Future ]

Visitors may end up more impressed with the restoration of the art deco lobby to its former grandeur as seen in 1931. But Malkin remains enthusiastic about the building's energy-efficiency changes — even if he remains somewhat amazed by the speed of the skyscraper's original builders.

"It took two years to do [the renovations], but it only took 13 months to build the building, so I still haven't figured that out," Malkin said.