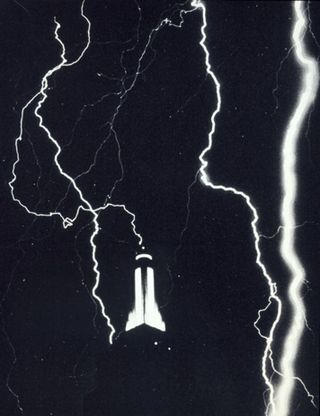 The Empire State Building is no stranger to lightning, as this 1934 photo shows.
(Image: © NOAA.)

New York City's lightning rod of a building — the Empire State Building — was struck by lightning three times in a row last night. Like a typical New Yorker, the building was not impressed.

The Empire State Building is hit by lightning quite often and its antenna was designed to double as a lightning rod. As the tallest building in New York, it soars 1,454 feet (443 meters) to the top of its antenna. Lightning can't resist such an attractive target. When last night's storm rolled in, three amazing strikes were captured on video. [In Images: Electric Earth]

The Empire State Building is struck by lightning about 20 to 25 times each year, on average, said Martin Uman, a lightning expert at the University of Florida in Gainesville. The building was once struck eight times in 24 minutes, so being hit three times within a short time span isn't that unusual.

"It happens all the time," Uman told OurAmazingPlanet. "In a given storm, it could get hit several times."

In Florida, where lightning is more common, a 1,000-foot-tall (300 m) building might average hundreds of strikes a year, Uman said. New York State is considered to have a "moderate" occurrence of lightning, with 3.8 strikes occurring per square mile each year, according to the New York City government's website. This compares to 20 strikes per square mile in Florida, and two in California. (One square mile is about 2.5 square kilometers.)

While 25 strikes a year is average for the Empire State Building, it can also see hundreds of strikes in a given year, according to the building's Facebook page.

That's exactly what the building's engineers had hoped for. The antenna was designed to serve as a lightning rod for the surrounding area and can prevent electrical damage to the building and its neighbors, according to the city government's website. Lightning is usually attracted to the tallest object because it is the easiest path for the lightning to take, according to the National Severe Storms Laboratory (NSSL), in Norman, Okla.

Thunderstorms are caused by rapidly rising and falling currents of air. The friction from this moving air creates electrical charges within a cloud. When the negative charge becomes great enough, it seeks an easy path to the positively charged ground below. The Empire State Building is an ideal escape route.

But that doesn't mean New Yorkers are safe from lightning strikes — lightning is notoriously unpredictable, according to the NSSL.

In August 2002, a 25-year-old Manhattan man was killed and a 24-year-old woman injured while watching an electrical storm from the roof of a four-story building in Chinatown.

In 1977, a blackout caused by multiple lightning hits on a main transmission line north of the city plunged most of New York's neighborhoods into darkness for up to 25 hours.