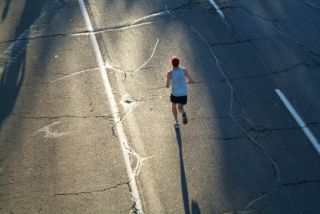 It is commonly believed that it is easier for righties to run counterclockwise, but that is not the entire story.
(Image: © Stockxpert)

It's believed to be easier for righties, who make up the majority of world population, to run in a counterclockwise motion. Putting their right foot forward and leaning into a turn feels more comfortable and provides more power and balance than the reverse direction, say physicists.

That's not the whole story though, since other animals like dogs and horses — with no hands to speak of — run their races that way too. Even NASCAR uses the convention, and those guys are just sitting on their butts.

Going counterclockwise just looks more natural, with runners passing the observer in the way most people, and especially the folks in charge of track and field regulations, read and organize chronological time (that's left-to-right, if you're in need of a visual). Needing to choose one for the sake of standardizing international competitions, counterclockwise got the collective nod.