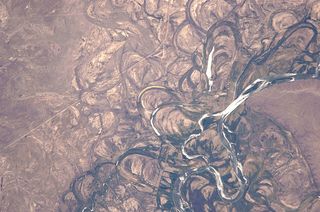 Meander scars, oxbow lakes and abandoned meanders in the broad flood plain of the Rio Negro, Argentina.
(Image: © NASA photo taken in 2010 from the ISS)

No number can claim more fame than pi. But why, exactly?

Defined as the ratio of the circumference of a circle to its diameter, pi, or in symbol form, π, seems a simple enough concept. But it turns out to be an "irrational number," meaning its exact value is inherently unknowable. Computer scientists have calculated billions of digits of pi, starting with 3.14159265358979323…, but because no recognizable pattern emerges in the succession of its digits, we could continue calculating the next digit, and the next, and the next, for millennia, and we'd still have no idea which digit might emerge next. The digits of pi continue their senseless procession all the way to infinity.

Ancient mathematicians apparently found the concept of irrationality completely maddening. It struck them as an affront to the omniscience of God, for how could the Almighty know everything if numbers exist that are inherently unknowable?

Whether or not humans and gods grasp the irrational number, pi seems to crop up everywhere, even in places that have no ostensible connection to circles. For example, among a collection of random whole numbers, the probability that any two numbers have no common factor — that they are "relatively prime" — is equal to 6/π2. Strange, no?

But pi's ubiquity goes beyond math. The number crops up in the natural world, too. It appears everywhere there's a circle, of course, such as the disk of the sun, the spiral of the DNA double helix, the pupil of the eye, the concentric rings that travel outward from splashes in ponds. Pi also appears in the physics that describes waves, such as ripples of light and sound. It even enters into the equation that defines how precisely we can know the state of the universe, known as Heisenberg's uncertainty principle.

Finally, pi emerges in the shapes of rivers. A river's windiness is determined by its "meandering ratio," or the ratio of the river's actual length to the distance from its source to its mouth as the crow flies. Rivers that flow straight from source to mouth have small meandering ratios, while ones that lollygag along the way have high ones. Turns out, the average meandering ratio of rivers approaches — you guessed it — pi.

Albert Einstein was the first to explain this fascinating fact. He used fluid dynamics and chaos theory to show that rivers tend to bend into loops. The slightest curve in a river will generate faster currents on the outer side of the curve, which will cause erosion and a sharper bend. This process will gradually tighten the loop, until chaos causes the river to suddenly double back on itself, at which point it will begin forming a loop in the other direction.

Because the length of a near-circular loop is like the circumference of a circle, while the straight-line distance from one bend to the next is diameter-like, it makes sense that the ratio of these lengths would be pi-like.