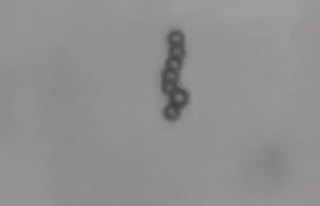 A 7-bead chain of magnets. Each microbead is less than five microns across.
(Image: © U Kei Cheang, Drexel University)

Healing with magnets might one day be considered legitimate medicine — at least if those magnets are also microscopic surgical robots.

By manipulating the same magnetic fields that were shown to control the swimming motion of microscopic robots, a team of engineers at Drexel University has demonstrated the ability to assemble and disassemble chains of tiny magnetic beads.

"If you have these simple geometries as building blocks, you can put them together to make more complicated shapes that can do more things," study co-author Henry Fu, now an associate professor of mechanical engineering at the University of Utah, told Live Science. [The 6 Strangest Robots Ever Created]

The hope is to eventually use these remotely controlled chains — dubbed modular microrobots — in the human body for medical purposes, such as delivering targeted medicines or performing surgeries on a very small, noninvasive scale, the researchers said.

Different combinations and shapes of the spherical beads could mean greater versatility. For example, the beads could be transported to a site in the body more easily in one configuration, Fu said, but could then be manipulated into different shapes to move through various tissues or perform specific tasks.

Charles Tremblay, a researcher in the Nanorobotics Laboratory at Polytechnique Montreal, who was not involved in the study, told Live Science in an email that the project is a "good idea," but said some of the challenges include the "need for visual feedback and transparent medium" to maneuver the robots.

Researchers observe the chains under a microscope, and remotely manipulate the "microswimmers" by adjusting an array of three solenoids, electromagnets that produce a controlled magnetic field. When rotated, the chains swim through fluid.

A chain of three beads, just 10 microns long (for perspective, the width of an average human hair is about 100 microns), is the simplest of the microswimmers the team worked with. That makes them "a little bigger" than bacteria that Fu studied previously. "I've looked at the fluid mechanics of how [bacteria] swim," he said, "The principles are the same whether you're a robot or a living thing."

The researchers had to work out ways to build chains without the magnets repelling each other. Disassembling the chains, on the other hand, is relatively simple. "You spin them around fast enough, and they will fall apart," Fu said.

The researchers found that longer chains swam faster when rotated at the same frequency as shorter ones, demonstrating at a basic level that different formations could have different uses. There may be many possible formations of the beads, but "we're not at the stage where we know exactly what shape we want to get to at the end," Fu said.

"We've just scratched the surface here with a proof of principle," Fu said, "That's what makes it exciting. There are a lot of possibilities."

The research was published online July 28 in the journal Scientific Reports.