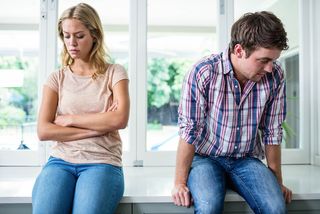 Contrary to what people might think, the money aspects of a marriage — the current earnings of a couple, or a wife's ability to support herself in the event her marriage breaks up, for example — don't appear to play a role in divorce, a new study suggests.

Rather, for couples who wed between 1975 and 2011, whether husbands were doing full-time work outside the home was linked with the couples' divorce risk, the study showed. But for couples who wed before that, the share of the housework done by the wife affected the risk of divorce. In other words, a couple's paid and unpaid work can affect the stability of a marriage.

"It isn't the money that predicts the risk of divorce — the cash stuff doesn't matter," said study author Alexandra Killewald, a professor of sociology at Harvard University. It's the behaviors of husbands and wives in a marriage — employment status and the division of housework — that may have symbolic value to each other about whether men or women are meeting the (potentially gendered) expectations of spouses, such as the husband-breadwinner and wife-homemaker roles, that affect a couple's divorce risk, she suggested. [6 Scientific Tips for a Successful Marriage]

Marriage is a social institution, and couples have expectations of what each partner will do once they enter into it, Killewald said. As these expectations have changed over time, so have the factors that may affect a couple's risk of divorce, according to the study, published July 28 in the journal the American Sociological Review.

In the study, Killewald analyzed data collected from the Panel Study of Income Dynamics, an ongoing survey of American families conducted by scientists at the University of Michigan, which researchers often use to study divorce. Killewald used data collected in the U.S. between 1968 and 2013 from more than 6,300 different-sex couples involved in a first marriage, in which the age of both spouses was between 18 and 55.

Killewald also developed computer models to predict the risk of divorce based on financial reasons, such as the share of housework done by husbands and wives, family income, full- or part-time employment by each spouse, and a wife's economic independence if her marriage broke up. In addition, she took into consideration other variables that may affect the stability of a marriage, such as the spouses' age, education, race and religion, as well as whether couples owned a home or had children.

The researcher did not look at how often a couple argued over spending habits or disagreed about financial priorities, she noted.

To understand how the roles and responsibilities in marriage changed over time and influenced the chance of divorce, Killewald compared couples married in 1974 or earlier with those married in 1975 or later. [The Science of Breakups: 7 Facts About Splitsville]

The findings showed that in couples married before 1974 —who might have more traditional views on the division of labor between spouses in the workforce and at home than couples married more recently — the share of housework done by the wife was tied to the risk of divorce. For example, in these couples, wives who did 75 percent of the housework were less likely to divorce than wives who did 50 percent of the housework, according to the findings.

This result shows that couples' expectations for their marriages may conform to a society's expectations for what it means to be "a good wife," Killewald said. But even in more recently married couples, the study found that women were still doing the majority of housework, although men were expected to pitch in more and typically did.

However, husbands in the more-recently married couples who did not have full-time employment faced a higher risk of divorce than husbands who worked full time, according to the findings.

In marriages since 1975 in which husbands did not have a full-time job for reasons that were not a deliberate choice, such as job loss or only finding part-time work, the average risk for divorce in the next year was 3.3 percent, compared with 2.5 percent in the next year in husbands who were employed full time.

These findings suggest that the male breadwinner role remains a key feature of many marriages, Killewald told Live Science.

Taken together, the findings suggest that although women in contemporary marriages may have more role flexibility when deciding whether to seek full-time work outside the home or focus on household work, without it affecting the stability of their marriage, this is not the case for men. And this speaks to the idea that society may not have changed much in  its expectations of a husband's role and responsibilities in a marriage, Killewald said.

The findings also suggest that for most of today's couples, a woman's role in the labor force and at home may have less influence on whether spouses split up. In other words, women's rise in the labor market does not appear to undermine a marriage, Killewald said.