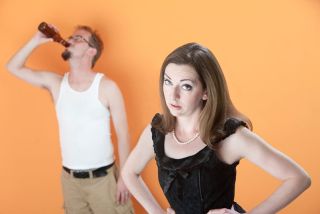 Turns out alcohol and marriage don't mix, with spouses who over-imbibe more likely to divorce than others.
(Image: © CREATISTA | Shutterstock)

Till death do us part may not apply to heavy drinkers, new research suggests. The more a person drinks, the more likely they are to end up divorced.

The likelihood of divorce is especially high for those couples where only one partner hits the bottle frequently, researchers report in the May 2013 issue of the journal Alcoholism: Clinical & Experimental Research.

"The risk of divorce is estimated to be tripled when the husband's level [of] drinking is low and the wife's drinking is heavy, compared with couples where both drink lightly," study researcher Fartein Ask Torvik of the Norwegian Institute of Public Health said in a statement.

Excessive alcohol consumption is a major public health issue in most Western nations, said Norwegian Institute of Public Health director Ellinor F. Major. Drug and alcohol abuse has been linked to violent, abusive relationships, and some preliminary animal studies even suggest that alcohol makes it harder for the brain to bounce back from traumatic experiences.

Given these serious effects, Torvik and his colleagues were interested in studying alcohol's influence on marriages. They used data from 19,977 married couples who participated in a long-term health study starting in 1984 or 1986. At the beginning of the study, the couples answered questions about alcohol use and mental distress. The researchers then followed up over the next 15 years, recording which couples divorced.

Controlling for demographic factors and mental distress, heavy alcohol use and marriage did not mix.

"Essentially, the more people drink, the higher is the risk of divorce," Torvik said. [6 Scientific Tips for a Successful Marriage]

That risk is still elevated, but not as much, if both spouses drink about the same amount, Torvik said.

Divorce risk went up most of all if it was the female half of the heterosexual couple who over-imbibed, the results showed. It's possible, Torvik said, that women who drink heavily are more affected by their alcohol intake than men. Alternatively, Major said, the results could be because heavy drinking is less tolerated for women than for men.

"Perhaps the husband is more apt to leave the spouse than is the wife when major problems occur," Major said in a statement.

"Couples who intend to marry should be aware of the drinking pattern of their partner since it may become a problem in the future," Major said. "Someone with a light or moderate alcohol use, who has a spouse who drinks heavily, should encourage that spouse to change their drinking pattern into light or moderate level if the main concern is a lasting marriage of good quality. Good advice probably would be to encourage a similar pattern of moderate or light drinking in both spouses."