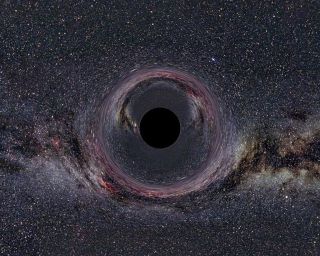 While black holes with masses of a few suns and ones with masses of millions of suns exist, scientists have been puzzled to see few with masses in between those two extremes. New work may suggest a reason why.
(Image: © Ute Kraus/Wikipedia, CC BY-SA)

For decades, while astronomers have detected black holes equal in mass either to a few suns or millions of suns, the missing-link black holes in between have eluded discovery. Now, a new study suggests such intermediate-mass black holes may not exist in the modern-day universe because of the rate at which black holes grow.

As big as stellar-mass black holes might seem, they are tiny in comparison to the so-called supermassive black holes that are millions to billions of times the sun's mass, which form the hearts of most, if not all, large galaxies. The oldest supermassive black holes found to date include one found in 2015 — with a mass of about 12 billion solar masses — that existed when the universe was only about 875 million years old. This finding and others suggest that many black holes were born in the dawn of time, back when the universe was smaller and matter was more concentrated, making it easier for them to form and grow. [No Escape: Dive into a Black Hole (Infographic)]

Much remains uncertain about how black holes reach supermassive girth and influence the universe around them. As such, astronomers want to analyze intermediate-mass black holes of about 100 to 10,000 solar masses that they expect would serve as the middle stages between stellar-mass and supermassive black holes.

However, while astronomers have discovered a number of potential intermediate-mass black holes, the evidence remains inconclusive, said astrophysicists Tal Alexander at the Weizmann Institute of Science in Rehovot, Israel, and Ben Bar-Or at the Institute for Advanced Study in Princeton, New Jersey.

Now these researchers suggest the dearth of these missing links may be due to the rate at which black holes may grow. They detailed their findings online June 19 in the journal Nature Astronomy.

In recent years, scientists have discovered a dozen or so instances of black holes devouring stars. If black holes grew solely by consuming stars and dense, compact objects such as white dwarfs and neutrons stars instead of, say, giant clouds of gas or dark matter, the researchers estimated that black holes would still grow at the relatively constant rate of one solar mass per 10,000 years. (If they could eat gas or dark matter, they could grow even faster, but the data regarding such materials in the early universe is more open to question.)

Although one solar mass per 10,000 years may not seem especially quick, it means that even a stellar-mass black hole could grow completely past the intermediate-mass stage after 10 billion years. In comparison, the universe is about 13.8 billion years old.

These findings suggest that the seeds for supermassive black holes "were created quite early on in galaxies, when things were more dense," Bar-Or told Space.com. These seeds already exceeded intermediate-mass stage by about 1.6 billion to 2.2 billion years after the Big Bang — "some or even most of the black holes may have passed the supermassive-black-hole mass threshold even earlier," Alexander told Space.com.

Although the researchers said that intermediate-mass black holes may exist in the present day in dense areas such as globular clusters of stars, they remain difficult to identify because the light produced by objects falling into them is "not spectacular, and there are other objects that can produce it," Alexander said.