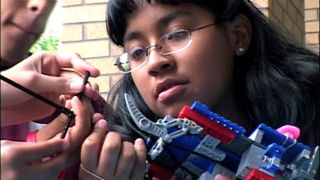 Young engineers built robotic Lego submersibles to compete in the Build IT Challenge at the Stevens Institute of Technology in June.
(Image: © Dave Brody, LiveScience)

HOBOKEN, N.J.—Leaning over the edge of an inflatable pool, a team of five teenaged girls guided their underwater craft made of Legos to dart among sunken aluminum pans and Wiffle Balls. Their pointy-nosed submersible plucked the point-scoring balls from the pool's floor and deposited them in the pans. With that confluence of dependable design and expert driving, the team from Lincoln Park Middle School in New Jersey won the Build IT Challenge in their division. The Stevens Institute of Technology hosts this competition annually on its campus here, gathering students earlier this month from more than 40 middle and high schools to pit their designs against one another in kiddie pools on the banks of the Hudson River. In dozens of such competitions around the world, young people build, program and drive vehicles made of Legos and other more rugged materials. These events are a bid to interest a new generation in careers in engineering and robotics, and they are becoming more sophisticated. At Stevens, the twist is the water. "By doing it underwater we were hoping to be a little bit different than other Lego robotics projects that have land-based vehicles," said Jason Sayres, who runs Stevens' Build IT program. This way, the lessons are in science and engineering, specifically concepts like buoyancy, stability and 3-D motion, he adds.

Teams scored points for depositing the balls in the pans, for swimming speed, innovative design and other factors. One student of Cranford High School in New Jersey, Bob Fallerjoked that in spite of a faulty propeller on his team's vehicle, "we can still score points for buoyancy control because we're just that good." Designs of the "'bots," as some teams called their vehicles, ranged from wide and meandering to small and agile. Some were boxy, some bristle-y. One of the more unusual designs came from Tenafly High School in New Jersey — a Lego boat that never dipped below the surface of the water; instead, it scooped balls from the floor of the pool with a long mechanical claw. New control Upping the ante this year, Build IT introduced Lego's NXT programmable control box. At least one student on each team learned to program the NXT. The programmer determined which of the vehicle's propellers would spin and in which direction when the driver moved the levers. Holding up the device, Abigail Symons from Lincoln Park Middle School demonstrated her work. "Those are the controls and those are the touch sensors and this is a rotation sensor," she said. She had never used such technology before she joined the team. "I thought I was going to be bad at it because I wasn't sure if the right motor would go with the right propeller, but in the end I got it so, it was good," she said. Like some other students at the event, she entered the competition on a whim. "We were in the class [learning to use computers] and they kind of just threw it at us. We were like, 'Oh my God it's going to be technology' and everything but then it came out good, so, it was definitely fun in the end," she explained. Going global The Build IT program is funded by a $1.2 million grant from the National Science Foundation with further funding by the Motorola Foundation. It is one facet in the NSF's scheme to entice students into future careers in engineering and other sciences. So far, the plan is working, said Beth McGrath, the science and engineering education director at Stevens. "The whole goal of this project is to hook students into pursing higher level courses," she said. "We've seen a jump in student interest in engineering as a possible career path and in their enjoyment in science." McGrath expects to launch a more technologically sophisticated international version of the challenge within the next two to three years. Teams from around the world would cooperate in online forums to design and build distinct parts of the robotic crafts, testing their designs and posting videos for their foreign counterparts to see. "It's aimed to give middle and high school students some of the 21st century skills, where teams from different countries who speak different languages would work together," she said. "We're taking the 'world-is-flat' world of work and embedding it within a middle or high school project."