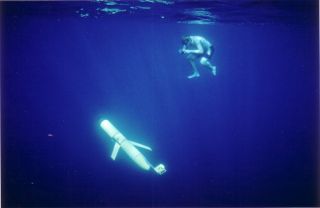 Scientists have invented the Prius of ocean-going submersibles — a new "green" robotic glider that runs on energy absorbed from the heat of the sea, rather than batteries.

The new underwater glider can stay at sea at least twice as long as previous submersibles that used battery power. It is the first autonomous underwater vehicle to travel great distances for extended periods running on green energy, according to the Woods Hole Oceanographic Institution (WHOI).

Submersibles gained fame in 1985 when WHOI's remotely-operated underwater vehicle, "Argo," discovered the wreck of the RMS Titanic near Newfoundland.

Built by the Webb Research Corporation in Falmouth, Mass., the new submersible has successfully traveled back and forth between two of the U.S. Virgin Islands, St. Thomas and St. Croix, more than 20 times. WHOI researchers plan to use the data gathered by the craft to study ocean currents in the area.

To power its propulsion, the submersible gathers thermal energy from the ocean. When it moves from cooler water to warmer areas, internal tubes of wax are heated up and expand, pushing out the gas in surrounding tanks and increasing its pressure. The compressed gas stores potential energy, like a squeezed spring, that can be used to power the vehicle.

"This glider allows longer missions than previous [battery-run] versions," said Ben Hodges, a physical oceanographer at WHOI. "It could be out there for a year or two years. None of the old ones could go beyond six months. And producing fewer batteries is good for the environment."

The torpedo-shaped glider moves through the ocean by changing its buoyancy to dive and surface, unlike motorized, propeller-driven undersea vehicles. To rise, oil is pushed from inside the vehicle to external bladders, thus increasing the glider's volume without changing its mass, making it less dense. The oil can be shifted inside to increase the density and sink the vehicle. A vertical tail rudder allows the glider to be steered horizontally.

Technically, the new vehicle is a hybrid, like Toyota's Prius, because it uses a small amount of battery power to run the onboard instruments and to move the rudder.

Gliders of this type are perfect for long-term, long-distance journeys that humans can't make, Hodges said.

"They can be very helpful in getting measurements that would be too expensive to get otherwise — any kind of study that requires long-term measurements from multiple locations," Hodges told LiveScience. "If you had to be there in a ship, it would cost millions of dollars."