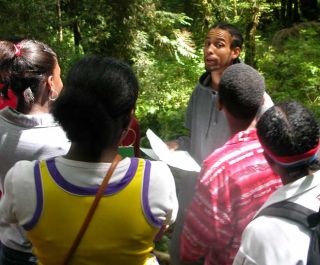 George "Duke" Brady, a rapper from California, took my forest ecology class at Evergreen State College some years ago. During our class field trips to the Olympic Peninsula, I introduced him to the ecology of temperate rain forests.

One day, during a spontaneous moment on a field trip, Duke inadvertently introduced a new way for me — a middle-aged, middle-income, female scientist — to reach inner-city youths and interest them in trees, nature and science.

Duke's lesson took the form of a rap song, one he improvised right after descending with other classmates from a small platform perched high in the forest canopy. Later titled "Forest Canopy Freestyle Rap," he opened his song with these lines:

Wet and green moss, I'm at a loss to describe the beauty falling on my booty But held up by strings Came up here to do some things.

As I watched Duke capture the attention of his classmates, I realized I could similarly use rap music to connect urban kids with forests — something that would be difficult for me to do alone without such a device. So soon after watching Duke's performance, I incorporated a recording of his nature rap song into my classroom presentations to inner city youth. To my delight, this technique worked every time!

No sooner would I start playing Duke's song to a class than even the most disengaged child would invariably snap to wide-eyed, wide-eared attention. Suddenly, these urban kids, who had previously had little first-hand exposure or interest in nature wanted to learn about forest creatures, like snakes, strangler figs and gliding arboreal mammals.

During the summer of 2004, I built upon my rap-based technique by leading a week-long program, called "Sound Science," for 40 urban and rural middle-school students from the Tacoma, Wash., region.

Partially funded by the National Science Foundation's Informal Science Education program, "Sound Science" featured dynamic, lively lessons in field biology. We recruited and transported the students with the help of the Department of Education's "Gear UP!" program, an effort to interest middle school kids in college.

"Sound Science" was taught by me and my colleagues from Evergreen State College in Olympia, Wash. — entomologist John Longino and marine biologist Gerardo Chin-Leo — but perhaps most importantly, "Sound Science" also included "an intermediary", an individual who connects well with urban youths and served as an ambassador between our students and scientists. Our intermediary was C.A.U.T.I.O.N., a tall, slim, and energetic rapper whose arms are festooned with tattoos from wrist to shoulder.

We kicked off the first day of "Sound Science" by taking the students into the rain forest to watch C.A.U.T.I.O.N. climb 60 feet high (six stories) into the canopy using technical climbing gear. As C.A.U.T.I.O.N. inched up the tree, I explained to the students that he was venturing where no person had ever gone before, and would be surrounded by completely different types of plants and animals than those that surrounded us on the forest floor.

After I completed my ecology lesson, C.A.U.T.I.O.N. rappelled back down to us, and even before he stepped out of his harness, spontaneously performed a rhythmic poem. As the children enthusiastically gathered around him, I realized that it was only then that my ecology lesson really hit home to them.

Later in the week, Longino led an experiment involving the homing abilities of thatch mound ant colonies in Evergreen College's parking lot; the experiment was punctuated by a rap song about evolution from C.A.U.T.I.O.N. Then, Chin-Leo taught the students how to collect marine organisms from the intertidal zone and to examine them under microscopes, while CA.U.T.I.O.N. provided a rap sound track that featured rhymes for words like "starfish," "barnacles" and "clamsquirts."

During the first three afternoons of "Sound Science", small groups of students huddled together in seminar rooms and hallways to craft musical interpretations of their field experiences. While doing so, they perused science encyclopedias and natural history magazines to generate inspiration and information, scribbled lyrics in notebooks and tested beats that they had composed.

Throughout these sessions, all three of us scientists and C.A.U.T.I.O.N. remained on call to provide individual help. So when, for example, 13-year-old Jamal and his buddies hit writer's block while struggling to match lyrics to their driving beat, Jamal issued an S.O.S. to C.A.U.T.I.O.N.: "We got no rhyme for photosynthesis, and we gotta work it in!"

Unfortunately, even C.A.U.T.I.O.N. — skilled though he is —could not finesse a rhythm for "photosynthesis." (Although he did help the students craft an alternative rhyme that conveyed their message.)

During the program's final two days, the students performed 12 pieces of nature-inspired, C.A.U.T.I.O.N.-guided rap songs, music and spoken poetry. These performances were recorded by engineers and packaged into a CD that each student took home to friends and family.