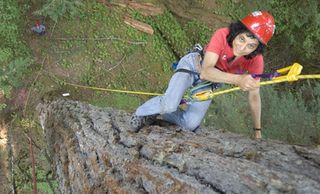 Nalini Nadkarni hangs from her canopy access gear, 150 above the forest floor in a 650-year-old stand of trees located just downwind of Mt. St. Helens, in Washington State. She is studying organisms and processes that occur in the upper canopy of these forests.
(Image: © John Huey, The Evergreen State College)

On a hot day last summer, hanging on a rope no thicker than my thumb about 200 feet above the forest floor, I was exploring the uppermost branches of a giant Douglas fir tree in a Washington forest. Why was I doing so? Because I am a scientist specializing in the ecology of the forest canopy, the thick mass of leaves and branches that crown the forest.

When I was a graduate student in the early 1980’s, the canopy was dismissed by many scientists as an inaccessible and unimportant part of the forest – “just Tarzan stuff.” But we now know that the canopy holds organisms that interact with one another and their physical environment in ways that can have impacts on the entire forest.

In order to truly understand forest ecology and the responses of forests to environmental threats such as global warming, we must understand how the entire forest works – from root tip to tree top.

In 1979, I learned how to ascend trees taller than 30-story buildings using rock climbing techniques so that I could help identify the plants, animals, and microorgisms living in the treetops. Other canopy researchers have studied the canopy from walkways, construction cranes, and even hot-air balloons.

In recent years, the use of such techniques has improved our understanding of canopy ecology. For example, we now know that some plant and animal species live their entire lives on the branches and trunks of trees without ever touching the forest floor.

When these “plants growing on plants ” die and decompose, they generate a layer of soil up to 10 inches thick that rests on canopy branches. This soil provides a habitat for a huge diversity of insects, earthworms, and spiders, which in turn, provide critical sources of food for birds and tree-dwelling mammals. Thus, the seemingly disconnected world of the forest canopy performs essential functions for the whole ecosystem.

After settling in on a treetop perch provided by a secure branch that summer day, I began work on my current research project: With funding from the National Science Foundation, I am studying the amazing diversity of canopy mosses. As many as 70 moss species may live in a single tree, and over 150 moss species may live in a single forest stand. I am working to identify some of the adaptations that these diverse species have evolved to survive.

Signs of an eruption

When I poked my head up over the canopy that summer day, I noticed the asymmetrical peak of Mt. St. Helens, looming just 40 miles away. On May 18, 1980, the volcano had exploded with a cataclysmic eruption that deposited over 1.4 billion cubic yards of ash over 22,000 square miles. Then after a dormant period, the mountain revived in 2004, sending out much smaller amounts of ash.

After turning my attention back to the mosses in my study, I peeled away a mat of moss for examination, and noticed something surprising: a light-gray strip of powdery material up to two inches thick lying between the moss and the branch supporting it. Although I had never seen this material in the canopy before, I noticed that it looked similar to layers of volcanic ash that I had seen in the soils of other forests in volcanic areas.

Therefore, I suspected that this grey material was volcanic ash from either the 1980 or 2006 eruption of Mt. St. Helens. But there was only one way to know for sure: by comparing the chemical and mineral structure of samples of the grey material to that of ash produced by the 1980 and 2006 eruptions of Mt St Helens. Such comparisons are based on the principle that ash produced by each volcanic eruption has a unique mineral structure and chemical composition. Therefore, a match between the chemical and mineral “fingerprints” of my canopy samples and those of the 1980 or 2006 eruption would pinpoint the origins of my sample.

Analyses conducted by the United States Geological Survey confirmed that my canopy samples were composed of ash from the 1980 eruption of Mt St Helens. This means that this ash had persisted on these thin canopy tree limbs, 200 feet above the forest floor, for 27 years of wind, rain, and exposure.

Because this ash is rich in minerals, I wondered if its nutrients were fertilizing the canopy mosses, or if the mosses flourished without their help. To find out, I conducted nutrient analyses of the moss, which revealed that the ash was not fertilizing the mosses; the nutrient content of mosses in the “ash zone” was the same as mosses I collected from a forest well outside the area where ash was deposited.

My field work that summer revealed another clue to canopy ecology: I noticed that the junctures between tree branches and trunks held accumulations of a thick white layer of ash from the 1980 eruption of Mt. St. Helens. This ash layer was, in turn, overtopped by another wide layer of soil, and so had apparently accumulated after the 1980 eruption.

The soil depth indicated that the soil was accumulating at a rate of up to four tenths of an inch per year. This was important because the speed of soil accumulation in the canopy had never before been measured and exceeded all previously projected rates of canopy soil dynamics.

Thus, Mt. St. Helens served as an unexpected source of insights about canopy ecology, and from my treetop perches, I continue to search in all directions for what else the canopy can teach us.