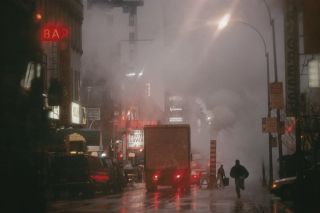 The word "moist" doesn't even begin to describe the clammy feeling evoked by a photo of steam rising from Broadway on a rainy day near Times Square. The photo, captured in 1988 by photographer Jodi Cobb, is one of 50 National Geographic images on display in a new, traveling exhibit.

The show also includes Steve McCurry's haunting 1984 portrait of an Afghan girl and Michael Nichols' 1991 photo of a zoo-bound chimpanzee reaching out to primatologist Jane Goodall in what is now called the Republic of the Congo.

Wildlife photographer Chris Johns, who served as the magazine's editor-in-chief from 2005 to 2014, selected the photos for National Geographic's very first mobile app in 2011. [See Some of the Amazing Nat Geo Photos]

"[It] seems silly now, but digital apps were very new then, and this was one of National Geographic's first photo gallery apps," said Kathryn Keane, National Geographic's vice president of exhibitions and experiences. "It was very well received and features some of the greatest photographs from our prestigious history in photography and photojournalism."

Johns even included one of his own photos, a 1996 shot of a tawny lion walking into a gust of wind, its eyes squinting as it patrols a dry riverbed in the Kalahari Gemsbok National Park, a wildlife refuge in South Africa.

Wildlife refuges are essential to preserving habitat and ecosystems. This explains why many of the wildlife photos have a conservation theme to them, Keane said.

"Telling stories about the plight of the world's wildlife populations is core to our mission," Keane told Live Science.

The show also features a ghostly photo of the Titanic taken in the North Atlantic Ocean in 1991. Emory Kristof, an innovator in underwater robotic imaging, took the photo with 10,000 watts of light mounted on a pair of new submersibles.

"At the time, these were the most detailed images that anyone had ever seen of theworld's most famous shipwreck," Keane said.

Photographer Thomas Abercrombie's view of Mecca, which, until now, hasn't been shown to the public, will also be on display in the traveling exhibit. And yet another photo shows a 1977 shot taken by a camera mounted on the tail of a Lockheed L-1101 plane. The photographer, Bruce Dale, used a remote-controlled camera to take a 25-second exposure of the jumbo jet, lit up by lights from the runway and the city.

The show, "50 Greatest Photographs of National Geographic" will run at the Carnegie Museum of Natural History in Pittsburgh until Sept. 11. After that, the exhibit will go to the Whatcom Museum in Bellingham, Washington, and then to the Elliott Museum in Stuart, Florida.