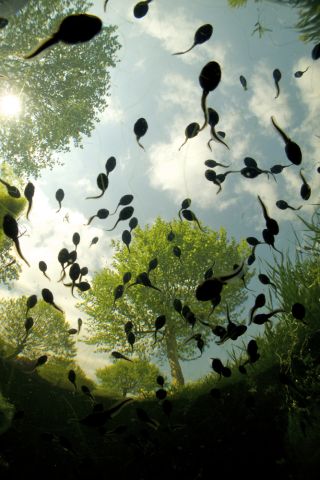 Tadpoles of many anuran species come in high numbers, but not many make it to adulthood. Here a group of common toad (Bufo bufo) tadpoles is seen from below.
(Image: © Bert Willaert, Belgium)

What does the world look like to a tadpole? That's what one photographer recently asked before jumping into a canal to capture the baby amphibian's perspective on camera. The photo he took came out swimmingly, earning him first place in a photography competition hosted by the Royal Society, London.

The man behind the pollywog photo is Bert Willaert, a biologist and environmental advisor in Belgium who has snapped thousands of photos of the natural world. But his favorite subjects are frogs, he said.

"When I noticed these common toad tadpoles in the crystal clear canal, I wanted to capture the chance encounter from their perspective," Willaert said in a statement. ['Flying' Tadpoles & Baby Gorillas Win Prestigious Photo Contest (Photos)]

Willaert's picture of a school of tadpoles outlined against the clear blue sky was one of more than 1,000 entries to the Royal Society Publishing Photography competition. The photo contest is a new event for the Royal Society, London, which is one of the oldest scientific societies in the world. The competition was created to commemorate the 350th anniversary of the journal Philosophical Transactions of the Royal Society.

The world's longest-running scientific periodical, the Royal Society's journal has always featured images and drawings that, in many cases, illuminate complicated subjects better than words ever could. And the winning tadpole photo fits right in with this centuries-old journal, said Willaert, adding that he took the photo to relay a message to viewers.

"To conserve the natural world, I think drawing attention to the beauty of these ordinary moments in our own neighborhoods, including our own backyards, is particularly important. I believe people will only conserve a thing when they know it exists — and how often will people have had snorkeled in their own garden pond?" he said.

The tiny tadpoles are examples of the power that a common biological phenomenon can possess when it's "visualized in a new light," said Alex Badyaev, an acclaimed wildlife photographer and one of the judges of the competition. The larval frogs are particularly striking because they represent "the other half of the ecosystem, the half we usually miss when looking down at a tadpole's puddle, but one that is very much part of the tadpoles' own view," Badyaev said.

The tadpole image won the overall competition, as well as the contest's Ecology and Environmental Science category. But other photos won top slots in the contest's additional categories. The first-place winner in the Animal Behavior category was Claudia Pogoreutz, a postgraduate student in the Department of Ecology at the Leibniz Center for Tropical Marine Ecology in Germany. Her photo of a black-tip reef shark hunting its prey highlights the synchronized swimming of the tropical clupeid fish, which inhabit the reef off the islands of the Republic of Maldives.

The top slot in the Evolutionary Biology category was awarded to Ulrike Bauer, a researcher in the School of Biological Sciences at the University of Bristol in the United Kingdom. Bauer, who studies plant morphology and biomechanics, submitted a picture of the leaves of the water fern Salvinia molesta, which are covered in whisklike hairs that help keep the plant dry, even when it's submerged for weeks at a time.

The three winning photos, as well as several runner-ups and judges' picks, will be displayed at a public event at the Royal Society, London, on Nov. 26. More information about the free event can be found on the Royal Society's website.