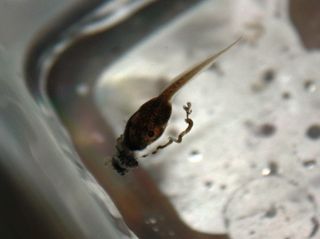 Though seemingly docile creatures, tadpoles can get snippy when hungry, and sometimes end up eating each other when the stakes are high. Now, new research suggests that the tiny creatures are not ruthless cannibals, but rather only eat their pond-mates when resources are scarce. Otherwise, they avoid this actually nutritious option.

Many species of frogs, salamanders and other amphibians demonstrate some degree of cannibalism, particularly when resources are scarce. Still, whether the animals prefer this dietary option or rely on it only as a last resort remains unclear in some cases.

Researchers based at the University of Saskatchewan in Canada wondered whether cannibalism was the most nutritious dietary option for tadpoles — common throughout northern North America. This would make sense because, theoretically, the meat of one's own species should contain vitamins and nutrients in quantities well suited for an individual's physiology.

"Any species that is the same as your own would theoretically be an ideal diet because they are going to contain all of the nutrients that you require for growth and development, in supposedly the correct proportions," study co-author Dale Jefferson told Live Science. "You can basically get everything you need from one source."

To determine whether tadpoles preferentially eat tadpole meat over other food sources, the team conducted a series of feeding experiments in which they offered the animals different combinations of frozen brine shrimp meat, cornmeal, tadpole meat or no food at all. In the wild, tadpoles may choose to eat algae or other smaller aquatic animals when not feeding on each other. [40 Freaky Frog Photos]

The team found that tadpoles consumed tadpole meat under conditions of starvation, and when competition for food was high due to the presence of other tadpoles, but that otherwise the animals chose alternative food sources. They preferred brine shrimp over cornmeal, likely for the shrimp's protein content, and tended to grow and develop faster when fed brine shrimp versus tadpole meat. The tadpole meat was only beneficial for growth and development compared to low-quality diets.

There are some inherent downsides to cannibalism as well, the team notes. For example, members of the same species can retaliate against each other and injure their aggressors, whereas algae or other smaller aquatic organisms cannot put up a fight. Also, it is detrimental from an evolutionary standpoint to limit the gene pool of one's own species by eating kin.

And finally, cannibalism increases the risk of transmitting pathogens, because members of the same species are susceptible to the same set of pathogens, whereas more distantly related species often cannot catch the same types of infections.

Jefferson says that the findings are timely now, as Canadian ponds in the study areas of his colleagues have dried up in recent years, potentially as a result of climate change. Future climate effects may continue to shrink tadpole ponds, making them more densely populated and increasing competition for space. This could potentially increase the rate of cannibalism and the spread of pathogens.

The study findings were detailed Tuesday (Feb. 18) in the journal Naturwissenschaften.