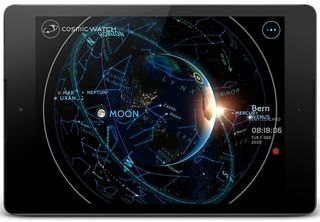 The Cosmic Watch app puts time in perspective, by showing how it relates to the cosmos and the movement of celestial bodies.
(Image: © Cosmic Watch)

More often than not, time is merely a metric for setting schedules. But a new app aims to change how you view time, by moving beyond hours, minutes and seconds to reveal your position in the cosmos and relate that position to the movement of celestial bodies.

The app, named the Cosmic Watch, can tell you what the solar system was like when you were born, or set the scene for the next solar eclipse.

The app provides a vivid view of the cosmos to show how time reflects our position in the solar system, said Markus Humbel, co-founder of the app. [5 of the Most Precise Clocks Ever Made]

"Time has a deeper meaning than what we typically think," Humbel told Live Science. It's more than just being late or on time, he said.

To get people interested in the more complex meanings of time, Humbel decided to delve into the basics first. Along with his colleagues, he obtained data on planet movements from NASA and other organizations with open-source data, and incorporated information on gravity, planet size and planets' orbital paths into the Cosmic Watch.

People have forgotten that the idea of time is associated with how Earth moves in the solar system, Humbel said. And, before scientists relied on ultraprecise atomic clocks, which determine the length of a second by measuring the natural vibration inside a cesium atom, they used astronomical clocks, which track planetary orbits.

"The Cosmic Watch is the first astronomical clock in the digital age," Humbel said.

Since 1967, the National Institute of Standards and Technology (NIST), part of the U.S. Department of Commerce, has defined a second as the duration of 9,192,631,770 oscillations of the microwave radiation absorbed or emitted when a cesium atom moves between two energy states. Precise timekeeping helps keep our modern world synchronized — electric power grids, GPS and other technologies all rely on maintaining accurate and coordinated time.

However, before the advent of cellphones and similar gadgets, humans looked to the cosmos to help organize their lives. People would decide to plant seeds depending on solstices, or arrange meetings based on the position of the moon, Humbel said.

The Cosmic Watch operates in three modes: "world clock mode" for timekeeping based on the atomic clock, "astronomy mode" to view constellations and planets in the sky, and "astrology mode" to view astral charts.

The astronomy mode points out the planets near you and reveals how celestial bodies move across the sky. The astrology mode displays the planets with their ancient symbols in the zodiac signs, and allows the user to set a birthdate and view a natal chart, which maps the planets and constellations, as they were when the user was born. Science originally united astronomy and astrology, Humbel said, and although astrology is not a real science, it has a deep meaning for many people, he added. "I thought it would be a beautiful aspect to include," Humbel said.