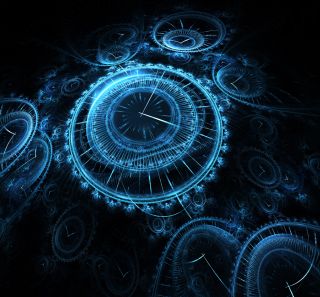 Most timepieces people use to tell time are accurate to within 10 or 15 seconds every month. Fancy mechanical watches (like a Rolex) will be off by more — a second or two each day. Scientists need something much more precise and accurate, because the phenomena they measure often last just billionths of a second.

That's where the atomic clock comes in. The first accurate version was built in 1955. Atomic clocks keep time by measuring the oscillations of atoms as they change energy states. Every element has a characteristic frequency or set of frequencies, and since the atom "beats" billions of times per second such clocks are very precise. At the National Institute of Standards and Technology, the "official" second is 9,192,631,770 cycles of an atom of cesium. (The quartz in a watch oscillates at about 32,000 times per second, some 290,000 times slower than cesium atoms.)

Scientists talk about atomic clocks in terms of stability and precision. For an atomic clock, precision is how well it measures the vibrations of atoms. By comparing two clocks, scientists can measure the uncertainty in reading that frequency – how precise a clock is. Stability is how much a clock's ticks vary over a given amount of time. Average a large number of ticks, say, 100,000 of them, and you will get a number that can be measured against the actual time the clock keeps. Scientists usually refer to precision when they say a clock is so accurate that it will gain or lose a second over millions of years. When they speak of accuracy, scientists typically are referring to how well a clock matches a given standard reference, so in that sense the most accurate clock is always the one they set the standard second with. [Keeping Time: Why 60 Seconds?]

Tom O'Brian, chief of the NIST Time & Frequency division, noted several types of atomic clocks: The one used to determine the standard second is based on cesium atoms, but other types use strontium, aluminum or mercury. Some use hydrogen. For even better precision, the latest atomic clocks super-cool the atoms in them to eliminate any perturbations from ambient heat.

The biggest buyer of atomic clocks, the telecommunications industry, deploys them to synchronize fiber optic switches and cellphone towers, O'Brian said. Atomic clocks are also used in the GPS system to accurately measure the timing of signals and to report one's position relative to the satellites.

Here are some of the most accurate clocks ever built, but O'Brian noted the technology is improving all the time, and scientists are trying to craft ever more precise measurements of time.

First brought on line in 2014, this clock, along with its predecessor, the NIST F1, helps to determine the standard second used by scientists all over the world. The NIST F2 also synchronizes telecommunications and even trading in financial markets for the official time of day. The clock uses a set of six lasers to cool the atoms (about 10 million of them), while another pair of lasers gently lofts the atoms upward inside a chamber filled with microwave radiation. The frequency of the radiation that alters the states of the most atoms is what NIST uses to define seconds.Its accuracy comes in part because it operates at a chill minus 316 degrees Fahrenheit (minus 193 degrees Celsius); the cold conditions help to shield the cesium atoms from stray heat that could alter the measurements of the atom's oscillations. This clock will gain or lose a second about once every 300 million years. [Top 10 Inventions That Changed the World]

Built by a team led by Hidetoshi Katori, this is an optical lattice atomic clock. It uses atoms of strontium trapped between laser beams and cooled to minus 292 F (minus 180 C). Optical lattice clocks measure the oscillations of ensembles of trapped atoms, and so can average out any errors. Its uncertainty, reported in the journal, Nature Photonics, on Feb. 9, is 7.2 x 10^-18, which is about a second every 4.4 billion years; the researchers said they were able to run two clocks of the same type to get that down to 2.0 x 10^-18, or about a second every 16 billion years.

NIST and JILA, a joint institute at the University of Colorado, Boulder, built a strontium lattice clock that reached a precision of 1 second every 5 billion years. The team, led by physicist Jun Ye, published their work in 2014, and double-checked the results by running their clock against another just like it. O'Brian said NIST plans another clock experiment to push that even further, to exceed the stability of the clock built by Katori's team in Japan. The clock works by trapping strontium atoms with lasers in a kind of pancake-shaped space. A red laser light tuned to a certain frequency makes the atoms jump between energy levels, and those jumps are the "ticks" — some 430 trillion every second.

NIST doesn't just use atoms of strontium and cesium. In 2010, NIST built an atomic clock that used an atom of aluminum, with a precision of a second per 3.7 billion years. This one uses a single atom of aluminum trapped in magnetic fields with a single atom of beryllium. Lasers cool the two atoms to near absolute zero. Another laser is tuned to the frequency that makes aluminum change states. But the states of aluminum are hard to measure accurately, so the aluminum is coupled to the beryllium atom. This is a similar process to that used in quantum computing setups.

Atomic clocks get all the glory, but O'Brian said that before they came along scientists still had to use mechanical clocks — and some were quite accurate. The Shortt clock, invented in 1921, was a standard scientific instrument in observatories until atomic clocks replaced it. The clock was actually a dual system, consisting of one pendulum in a vacuum tank linked by electric wires. The secondary clock would send an electrical pulse every 30 seconds to the primary one, to ensure that the two stayed synchronized, and the pendulum in the vacuum was made of a nickel and iron alloy to reduce any thermal expansion, which would alter the length of the pendulum and thus its swing. The clock is so accurate that the pendulums can be used to measure gravitational effects from the sun and moon, and it was this instrument that showed the Earth's rotation was not, in fact, uniform. Tests at the U.S. Naval Observatory in the 1980s showed the clock had an accuracy of 1 second in about 12 years.